Ražnjići are a traditional meal of the Bosnian-Herzegovinian cuisine

The term Bosnian-Herzegovinian cuisine (often abbreviated also Bosnian cuisine ) encompasses various regional cooking styles and culinary specialties in Bosnia and Herzegovina . Like the history and culture of the country, it is strongly influenced by the country’s rulers who have changed over the centuries. Bosnian cuisine is part of Balkan cuisine and has great overlaps with Turkish and Mediterranean cuisine . In addition, influences of Austrian and Hungarian cuisine from the time of the monarchy can be seen.

Despite western influences, Bosnian cuisine is very similar to Eastern European cuisine, especially Macedonian cuisine. Meat is the focus of Bosnian dishes. Meat dishes are available in various versions, both cooked and grilled, baked or air-dried. Special specialties are goats grilled over an open fire. or lamb. Ražnjići and Ćevapčići are among the most famous meat dishes in Bosnian cuisine . The meat dishes are usually served in large portions and strongly seasoned.

In many places today you can also get fast food . In addition to international classics such as hamburgers, pizza and doner kebabs, pita and burek are the main items sold. 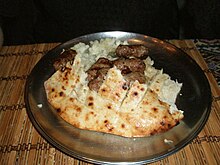 Ćevapčići with onion in a pita