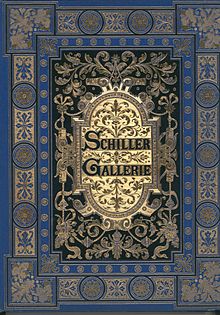 In general, lavishly furnished books are called splendid editions , especially works in the historical design of the 19th century.

A rich set of books (gold-embossed cover, gilt edging , red printing) and book decorations (frames, strips, vignettes, initials, etc.) and illustrations are characteristic of magnificent editions . The magnificent work is a representative showpiece, often designed as a literary and book-artistic monument. Large-format works were on display in the salon as “Besehbuch”, and were presented on a standing or table desk. “The splendid editions in the second half of the 19th century are constitutive components of furnishing total works of art; they are integral pieces of equipment like the plaster busts and statuettes that conquer the salon at the same time. ”(Mazzoni, p. 58) Small-format splendid editions served as gift books, especially for women.

Classical and romantic texts from Goethe and Schiller to Heinrich Heine and their epigonal successors were published with preference . Anthologies of poetry (see the anthologist Karl Zettel ), poetry editions and poems (such as Joseph Victor von Scheffel's “Trompeter von Säckingen” or Conrad Ferdinand Meyer's “Hutten's Last Days”, 4th edition in major octave 1881) were less popular Prose works. For the illustrators ( Wilhelm von Kaulbach , Alexander von Liezen-Mayer , Arthur von Ramberg , Paul Thumann and others) the magnificent works were an important field of activity. The publishers could get the book decorations as well as the illustration material through the cliché trade ( cliché (printing technology) ).

The heyday of such splendid works is the 19th century, especially the founding period and historicism up to the First World War. The book art movement turned against the machine-made magnificent editions around 1900.