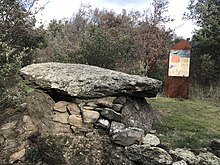 The dolmen of Las Apostados (also called dolmen of Camp del Prat) is located on Camp del Prat, 500 m north of Trilla in the north of the Pyrénées-Orientales department in France . In France, dolmen is the generic term for Neolithic megalithic structures of all kinds (see: French nomenclature ).

The place name Las Apostados appears in the Napoleonic cadastre of Trilla in 1812. He refers to stones lying on top of each other. The first author to mention the dolmen is André Vigo in 1961.

The architecture is typical of the 4th or 3rd millennium BC. BC in the eastern Pyrenees for either the southern Middle Neolithic or the bell-beaker culture of the Copper Age . The Pyrénées-Orientales dolmens are located in the hilly or mountainous areas of the department, usually on a pass, ridge or elevation. The dolmen could be the rest of a gang dolmen or a simple dolmen. It is wider than it is long, which is rare for dolmens (2.45 m wide and 1.5 m long). The panels were changed and a stone wall was added, which probably served as protection.

The remains of the Las Apostados dolmen are covered by the 30 cm thick ceiling plate, which is formed by two side plates and a stone wall. A distinctive feature of the dolmen is that it is open to the west, while the majority of dolmens in the region open to the east and south-east. The vertical bearing stones are flat plates. The floor slab has disappeared and has been replaced by a collection of stones that form part of a wall. A larger stone can be a remnant of the original soil.

There is nothing left of the tumulus, apart from a few stones in a pile of stones west of the dolmen. The arrangement of the stones and the presence of a closure plate west of the dolmen could indicate a simple dolmen (without a corridor) of the “chambre pyrénéenne” type. However, it is also possible that the closure plate is not original and that the facility is a dolmen whose passage has disappeared.

The Dolmen Trail in the Fenouillèdes region leads to the Dolmen de los Apostados and its neighbor, the Dolmen of Las Colombinos, less than a kilometer away.

The dolmens of the Pyrénées-Orientales are part of a Mediterranean arch that extends from Provence to Catalonia and from the Neolithic to the Bronze Age. The condition of the Las Apostados dolmen and the lack of archaeological finds do not allow it to be dated.