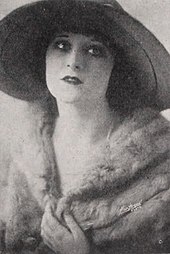 Dorothy Revier grew up in her native Oakland, where she graduated from high school. She then moved to New York City to begin dance training. Revier later continued this in Paris . While there, she was discovered by a talent agent and hired for a role in Life's Greatest Question in 1921 . Her film debut as Dorothy Revier followed in 1922 in The Broadway Madonna , a film by her first husband Harry J. Revier.

In the 1920s, Dorothy Revier had her most active period with several dozen film appearances. From 1930 onwards, with the advent of talkies, her career gradually declined. Revier was still mostly seen in the female lead, including 1931 in the crime thriller Charlie Chan - Death is a black camel . In 1936 she made her last film, The Cowboy and the Kid .

Revier was married three times. Her first marriage to Harry J. Revier was divorced in 1926, but she still kept his last name for film appearances. The subsequent marriages to Charles Johnson and advertising designer William Pelayo also ended in divorce. All relationships remained childless.

Dorothy Revier lived in West Hollywood , a neighborhood in Los Angeles. She died on November 19, 1993 at the age of 89 at Hollywood Presbyterian Medical Center. Revier was buried in the Forest Lawn Memorial Park .