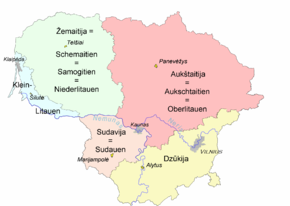 Dzūkija (outdated also Dajnawa , Polish Dzukia ) is one of the five historical regions of Lithuania . It is the southernmost of these regions and the only one for which there is no German name.

Of all the regions of present-day Lithuania, it was the least exposed to expansion and attacks by the Teutonic Order in the Middle Ages .

In Dzūkija, the Lithuanian dialect Dzūkisch (South Aukštaite) is spoken. In addition, one of the largest Polish-speaking minorities outside Poland still lives in the region, making up to 75 percent of the population in parts of Dzūkija.

Dzūkija includes the Alytus District and most of the Vilnius District including the state capital. Also Trakai , the ancient seat of the Lithuanian Grand Duke , is located in this region.

The Vilnius district borders on Belarus to the east and has a high percentage of the population of indigenous Poles . The sparsely populated district of Alytus borders on the Republic of Poland , but today has a very small Polish population. Resident Belarusians also live in both districts .

The Dainava Forest is part of the region.