The guide band (also guide ring) is part of a projectile made of guns . It usually has three internal ballistic tasks: 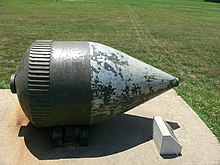 The guide bands are usually made of copper, a softer metal as a tube and floor, so that they in the coatings can be pressed in. Rarely, as for example in the German Paris Gun , steel used. Depending on the load, one or two guide straps are attached. The guide bands around the bullet always have a slightly larger diameter than the inner diameter of the barrel in order to achieve a complete seal when firing. At the same time, when accelerating, the bullet receives a rotational movement around the longitudinal axis, i.e. the twist, which affects the precision of the flight path . Especially in the case of heavy artillery shells, the guide bands can be designed as twist guide rings. During the manufacture of the bullet, longitudinal grooves into which the cables can engage are worked into the twist guide rings. This enables a form fit between the projectile and the rifles when the projectile is placed in the barrel, which increases the service life of the gun barrel. If grenades are not set correctly, ie the connection of the grenade to the barrel with guide straps does not result in a clear click, the pipe may burst or crash .

American Minié-bullet without culot , left: before the shot,
middle: after the shot,
right: archaeological find from the American Civil War

The grooves in the sub-caliber Minié bullets for muzzle-loaders fulfilled a double task . When the shot was released, the hot gases penetrated the hollow floor and expanded the projectile. The bullet grease required for lubrication was located in the grooves, while at the same time the elevations provided a seal against the barrel.