The Fairey Swordfish was a biplane - combat aircraft of the British manufacturer Fairey Aviation Company , which during the Second World War as a carrier based torpedo bomber , reconnaissance aircraft and submarine hunters was used. From 1934 to 1944, 2396 machines were built. The Fairey Swordfish gained fame because the aircraft type was involved in the attack on Taranto against the Italian fleet in 1940 and in the sinking of the German battleship "Bismarck" in 1941. 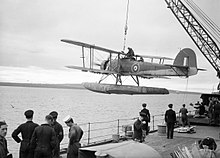 The manufacturer Fairey developed the biplane TSR1 on its own initiative , which was destroyed in an accident in September 1933. When the British Ministry of Aviation issued a tender for a torpedo and reconnaissance aircraft for use on aircraft carriers, Fairey constructed the TSR2 biplane . The prototype of the Fairey Swordfish with the military approval K4190 emerged from this construction. The first flight took place on April 17, 1934.

The machine, flown by two to three crew members, was powered by a Bristol Pegasus star engine. The armament consisted of two .303 British (7.7 mm) caliber Vickers machine guns : a synchronized fixed machine gun firing forward through the propeller circle and a moveable gun mounted on a mount for the rear gunner. A 457 mm torpedo or bombs could be carried to combat ships .

The Mk I version was also in use in a variant with floats, without changing the name. These aircraft were intended for the use of warships and the launch by catapult and were used, for example, on board the HMS Warspite and other larger combat ships as board aircraft.

This type became known when he was instrumental in the sinking of Italian naval units in the port of Taranto ; The airplane also played a central role in the sinking of the Bismarck . Furthermore, an aircraft of this type was responsible for sinking the U 64 submarine . In the fighting during the Cerberus operation in the English Channel , however, the Swordfish machines no longer proved themselves. In March 1944, carrier-supported Swordfish from the Northern Sea Convoy RA 57 sank the submarines U 472 , U 366 and U 973 . At the beginning of May 1944 they sank the submarines U 277, U 959 and U 674 in the same area of ​​the sea during convoy RA 59 .

Since the successor to the Fairey Albacore , a biplane of a very similar design, was unsuccessful due to the unreliability of the Bristol-Taurus engine, the Swordfish remained in active service until the end of the Second World War. Their main task was anti-submarine defense .