The error correction model (short: FKM ) is a statistical model from the field of econometrics and time series analysis . It was developed by Clive Granger , who was awarded the Alfred Nobel Memorial Prize for Economics in 2003. An error correction model shows the short-term dynamics of an otherwise long-term equilibrium system in order to open up the possibility of considering them separately from one another. In English it is known as the Error Correction Model or ECM for short , this abbreviation is also common in German-speaking countries. A vector error correction model (short: VECM , for Vector Error Correction Model ) is particularly suitable if a system of time series is not stationary in the levels, but stationary in the differences. If the long-term dynamics were tested without a vector error correction model, strong autocorrelation would occur between the residuals because they would contain the short-term dynamics.

Prerequisites for a meaningful application of the error correction model are:

It should be noted that in the case of numerically known cointegration vectors , the equilibrium deviations that trigger an error correction can be calculated from the observations of the individual time series. However, this is mostly (always) unknown, so the deviations from the equilibrium are replaced by proxy values ​​in order to be able to estimate the coefficients of the error correction model using a simple KQ regression . The steps required for this are explained below: 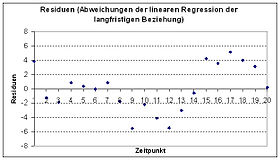 Residuals of the long-term relationship

It results as the disturbance variables of the regression . These form a new time series and must be stationary here. A common test for stationarity is the Dickey-Fuller test . The residuals shown here are not stationary, the process would have to be terminated.

The representation is also possible in matrix notation . The most popular method for estimating a vector error correction model goes back to Johansen and Juselius (1988) and defines the model as follows: