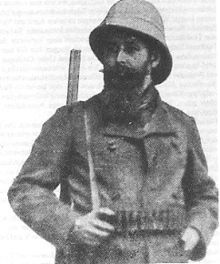 Emmerich spent his childhood and youth in Hamm. The ethnologist Adolf Bastian frequented his parents' house , through whom he received his first impressions of distant countries. He received further suggestions from the writer Friedrich Gerstäcker , with whom he already exchanged letters as a boy.

He broke off his studies and traveled as a cabin boy to China, from where he got to know the island world of the South Seas. He had completed a medical degree in Palermo in 1886. In the following years he traveled around the world. He traveled to South America, Mexico, North America, Java, Borneo, China, Tibet and Ceylon, probably on behalf of scientific institutions. He took part in the Boer War and hoped from Burma to penetrate the still unexplored southern Tibet, but this was prevented by the outbreak of the world war.

So he returned to Germany in 1915 and then began to evaluate his travels as a writer. After a few shorter articles, he published in book form from 1918. He mainly wrote novels for young people in the style of expedition and adventure reports . Between 1923 and 1925, a twelve-volume series World Travel and Explorer Adventure was published . The veracity of his works is controversial.