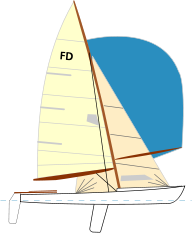 The Flying Dutchman is a two-man, one-design regatta dinghy .

The first design was made in 1951 in the Netherlands by Conrad Gülcher and Uus van Essen. The design was similar to the 15-square-meter touring dinghy and the Flying Fifteen .

In 1952, the then President of IYRU (today World Sailing ) Sir Peter Scott named the prototype "Flying Dutchman". Shortly afterwards, comparative regattas with many different boats (including Hornet , Sharpie , Caenton and Thistle) took place, which the Flying Dutchman won. That was the hour of birth of the Flying Dutchman, and the national and international class organizations began to establish themselves. In the sixties there were fleets in Europe, North America, South Africa, Australia, New Zealand, Venezuela, Argentina and Thailand.

Many technical achievements were developed in the Flying Dutchman. Among other things, the sail window, spinnaker bag, endless harness and the rake. With its versatile trim options and the immense sail area in relation to its weight, the Flying Dutchman is a fast-paced, but demanding dinghy, which requires a lot of skill to master. Even today, almost 60 years after its development, it is considered to be the fastest conventional dinghy.

In 1960, the Flying Dutchman replaced the Sharpie at the Olympic Games and remained Olympic until 1992. But the loss of Olympic status did not mean the end of the boat class. Even today there are large fleets in Europe and North America, among others.

Since 2005 the Flying Dutchman can also be sailed with a mast made of carbon fiber reinforced plastic .

The Flying Dutchman - the boat with which the Spaniards Luis Doreste and Domingo Manrique won the Olympic title at the Olympic Games in Barcelona in 1992. Maritime Museum of Barcelona.