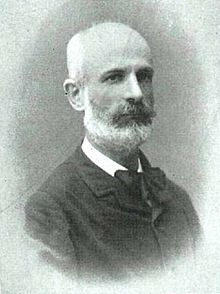 As a student of Julián Sanz del Río and a representative of Krausism , Giner de los Ríos founded the "Institución Libre de Enseñanza" (Free School) after losing his Madrid chair for legal philosophy in 1876 for political reasons .

Based on his conception of personality as a totality of mind and feeling, he strove for a renewal of education and upbringing. That is why he included arts and crafts subjects in the curriculum and withdrew his (private) school from ecclesiastical and conservative state control. Miguel de Unamuno , José Ortega y Gasset and Antonio Machado , among others, emerged from this school .

Because of his critical attitude to positive law, based on a rationalistic natural law , he is considered a forerunner of legal sociology . Giner de los Ríos advocated criminal law reform, particularly with regard to young people . He has profoundly shaped liberal thinking in Spain.