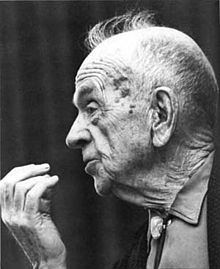 Freeman Tilden (born August 22, 1883 in Malden ( Massachusetts ), † May 13, 1980 in Warren ( Maine )) was an American writer and journalist . He is considered the founder of the interpretation of nature and culture .

Freeman Tilden was born in 1883 as the eighth of nine children of Millicent Tilden in Warren, Maine, north of Boston. Tilden's father, Samuel, is the editor of the Boston Transcript . He introduced the young Freeman to literature at an early age, so that he found joy in writing and reciting as a child and made the family happy with longer Shakespeare passages. He received private tuition and at the age of 14 was able to make his first contributions to his father's newspaper.

After Freeman Tilden graduated from high school, his father wanted him to attend Harvard University. Instead, he travels extensively, acquiring several foreign languages ​​and becoming a foreign correspondent for various major newspapers. In this context he lives in London for a few years. At the same time he writes short stories and novellas, z. Some appear in series in several newspapers as well as poems and scripts for radio broadcasts and plays.

On a trip to Vermont, Freeman Tilden met the teacher Mabel Martin, whom he married in 1909. The couple moves to New York, but due to the ongoing lively travel activity, during which Tilden is now temporarily accompanied by his wife, none of the four children the Tildens are supposed to have are born in the same place. It wasn't until 1929 that the family settled in Warner (New Hampshire) in order to lead a more steady life from then on. From 1939 Freeman Tilden published his own magazine, Open Door , in which he increasingly turned to natural topics.

1941 Freeman Tilden met in New York the director of the US National Park Service , Newton Drury, who took office in 1940 and that same year the of John Muir coined and commonly have long term Heritage Interpretation (English. Heritage Interpretation ) for has officially introduced information and educational work in the park service. Drury casts Tilden under its spell with tales of Yellowstone , Yosemite and Grand Canyon National Parks . From then on, Tilden traveled to the national parks and in 1945 began to write the first articles for the Park Service, whose primary goal at this time was to encourage Americans to visit “their” parks. In this context, Drury commissioned Tilden to prepare a book that would do justice to this goal. The National Parks: What They Mean to You and Me appeared in 1951 and is soon considered to be the best publication ever written about the national parks.

There are people who visit the national parks and make their most important discovery: themselves. When they say: “I didn't even know that there were such beautiful and interesting places!”, Then they actually mean that their ability to be beautiful and perceiving meaning was unaware. They fall in love with the parks - not because of their outstanding characteristics, but because of their nature. They can't find words for it, but they feel it. They cultivate the pleasant hobby of securely trying out the greatest of all secrets, which science only partially reveals: our place in nature. Whatever can be learned about this secret, it can only be learned where there is sufficient space to preserve the natural processes intact and detached from the compulsion of usefulness.

Tilden already gives an idea of ​​what he thinks is important for the work with the visitors to the park. In addition to the requirement of the preservation of the natural heritage, these are the direct reference to the living environment of the visitors and the demonstration of a deeper truth that lies in the phenomena and that needs to be revealed.

Freeman Tilden is deeply impressed by the beauty of the North American natural landscapes. He was all the more concerned to discover that the Park Service's support for the visitors largely fails to serve its purpose. The type of nature tour, such as that propagated by Enos Mills at the beginning of the 20th century, has given way to a style that ranges between spectacular slapstick and dusty showcases, and its success depends solely on the motivation and skill of the park rangers on site but for which there are no training standards with regard to visitor care. In 1952, Tilden urged Conrad Wirth, who had been director of the National Park Service since 1951, to commission a study on the interpretation. Wirth recognizes their necessity, and after the funds have been approved, he assigns Tilden to formulate the basic principles for the nature and culture interpretation in the parks. Tilden undertakes several trips again and stays for a long time in the Castillo de San Marcos National Monument in Florida in order to conduct interpretive tours there himself and thus to gain his own practical experience in working with visitors. As a result of his studies, he presented a definition and six principles of interpretation in his book Interpreting Our Heritage in 1957 . At this point, Freeman Tilden is 74 years old.

Interpreting Our Heritage becomes the basis for the systematic further development of the Park Service's information and educational work in the 1960s. In 1962, Tilden was awarded the Pugsley Medal for his services, which is awarded to personalities who are involved in nature conservation and for the parks in the USA.

Mabel Tilden dies in the same year. Freeman Tilden initially lived with his son Paul's family near Washington DC for some time, but then returned to the north where he bought a farm in Warren, Maine. There he writes The State Parks and Following the Frontier and is a regular speaker at the Park Service training center for interpretation rangers in Harpers Ferry (West Virginia), which he helped build .

In 1970, Freeman Tilden took another eleven-month trip through the parks to advise George Hartzog, who has been Director of the Park Service since 1964, on how to deal with the energy crisis.

The US National Park Service created the Freeman Tilden Prize in 1982, which has since been awarded annually for outstanding achievements in the field of nature and cultural interpretation. Tilden's book Interpreting Our Heritage will be published for the fourth time in 2008 and, more than fifty years after it was first published, it is still regarded as an indispensable introductory literature for the interpretation of nature and culture.

In his main work Interpreting Our Heritage, Freeman Tilden defined the interpretation of nature and culture for the first time and applied principles to it. He created the training basis for nature and cultural interpreters in the US National Park Service ( Interpretive Ranger ).

As a result, interpretation has found its way into a subject at several universities in the USA. Not only other federal agencies such as the US Forest Service , the Bureau of Land Management or the Fish & Wildlife Service , but also numerous state parks, zoos, botanical gardens and (open-air) museums have adopted the concept.

Since 1973, interpretation has developed into the most widespread concept of information and educational work in visitor-oriented institutions internationally. Today, more than 7,000 members are organized around the world in the associations for the interpretation of nature and culture.