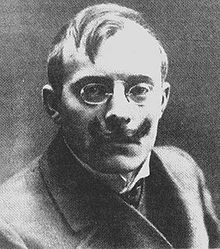 Scott was born the son of a seafarer preacher in Leith, Scotland . In 1883 the family moved to a parsonage in Høvåg in Norway, in 1887 Scott moved to Kristiansand to go to school (secondary school and grammar school ) there.

Scott began writing in his youth. Some poems appeared in the local newspapers. Later he also wrote plays, children's books and novellas.

Scott married in 1915 but divorced in 1918, only to remarry in the same year. At that time Scott was living in Arendal .

In the 1930s he took sides with Vidkun Quisling and his Nasjonal Samling , which was controversial at the time and after the Second World War .

Especially in Norway, Scott is a well-known author of novels and children's books. His most famous work is called " Kilden " (The Source). It is about the piety of the fisherman Mark, despite the resistance of his fellow men.