Generation X is the title of the 1991 episode novel by the Canadian writer and artist Douglas Coupland . The translator is Harald Riemann .

The protagonists of the novel, Andrew Palmer - he studied Japanese at the university -, Dagmar Bellinghausen, former marketing expert, and Claire Baxter, daughter from a wealthy family, live in rental bungalows in the Californian city ​​of Palm Springs . They get by with low-paying jobs for which all three of them are overqualified: one works as a perfume seller in a department store, the other two are bartenders. The “members of the poverty jet set”, as they call themselves, entertain each other by telling each other stories: stories from their lives, family stories, but also fantasy stories and life dreams that they indulge in, and terrifying visions of a possible nuclear strike, of which American society of this time is haunted. And they spend a lot of time in front of the TV. At the end of the novel, the three are on their way to Mexico to open a hotel there.

The text is divided into three parts with a total of 32 short chapters. The last chapter Numbers is no longer part of the novel, but contains statistical data on population and the environment.

Note: The information comes from the edition Douglas Coupland: Generation X. Stories for an ever faster culture. Goldmann publishing house

Use planes while you still have the opportunity . Graphic from the first chapter 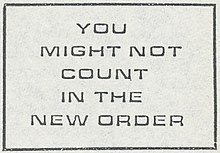 You might not count in the new order . Graphic from Adventure Without Risk is Disneyland

Diagnosis and criticism of the affluent society

According to Coupland, it is characteristic of this generation that for the first time without the effects of war they have to be content with less prosperity and economic security than their parents' generations, but on the other hand they atone for their economic and ecological sins. The novel tells “stories of the hangover mood in America after the last big break under Reagan and Bush organized on credit” (Deutschlandfunk) about a generation with “too many TVs and too little work” (Newsweek). Coupland criticizes the affluent society of the previous generation with his key novel, which "dies at 30 to be buried at 70". Originally, the term Generation X was intended to indicate that this generation has so far successfully escaped the naming frustration of the advertising and journalistic trade. Coupland's book hit the bestseller lists and the title became a catchphrase for the generation that had not been named before.

In addition to the title, other vocabulary from Coupland's narrative style became commonplace. Actually, Coupland should have written a lifestyle lexicon about the "Twentysomethings". The former art student, however, abandoned the idea of ​​an entertaining non-fiction book and instead presented an anecdotally told novel whose heroes refuse "to make little monsters so keen on a hamburger that their enthusiasm lasts beyond their puke" . The first sketches from the original project were incorporated into the novel as marginalia , which should explain Coupland's word creations in a “lexicon of non-functioning culture”. Coupland also coined the term McJob , defined in the novel as “a low paid job in the service sector with little prestige , little dignity, little use and no future. Often referred to as a satisfying career by people who have never had one ” .

Coupland contrasts the ingrained lifestyle created by social and economic constraints with a philosophy called “lessness” , which does not measure the value of life by the accumulation of status symbols. The 'new' value system is also ironically referred to as “exhibitionist modesty”. Because of this attitude towards life of refusal to consume , Coupland's Generation X (e.g. by the Seattle Times ), based on Gertrude Stein, would also be referred to as the “Lost Generation of the 90s”. Coupland supports his observations at the end of the book with some statistics and quotations from various journals.

The title and its historical background

Since the early 1950s, the term Generation X has been used variously in connection with the respective contemporary youth; the term was so to speak "in the air". See the section on conceptual history in the article on the sociological term of the same name .

Coupland himself provided various explanations as to who suggested the title of his book. Coupland, then an art student, was supposed to write a non-fiction book about the American youth of the time for a Canadian publisher, but instead delivered a novel. However, he added a glossary of neologisms for the “scene” described. The book was rejected by the publisher, but was then published by Simon & Schuster , after a hesitant start it developed into a bestseller, and the author advanced to become a spokesman for the sensitivities of his generation and a diagnostician of the zeitgeist .

A few of the large number of definitions in the book. These have not passed into common usage, but describe the attitude towards life of Generation X, as Coupland sees it:

Coupland's new word creations were eagerly picked up by the US media and marketing firms and used as a "guide to categorizing and understanding the elusive age cohort". Even today, the buzzword is used by the publisher as a marketing tool when he publishes his marketing book about the so-called baby boomers (born between 1943 and 1960) under the title Marketing to Generation X. Strategies for a new era .

Der Spiegel assessed the literary quality of the novel rather cautiously, but considers the author to be an “intelligent observer of everyday life” and a “master at assigning concise labels for current phenomena”. In the opinion of the Spiegel, the book could not have become a cult book read and cited worldwide without a glossary . The novel was translated into 16 languages, printed in several editions and sold over 300,000 copies in the United States alone by 1994.

The term Generation X is also used in sociology or in marketing for a population cohort. Generation Y was derived from this .