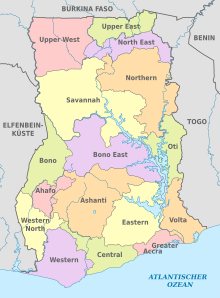 The health system in Ghana is basically based on two main pillars. On the one hand, traditional medicine has retained its place to this day, especially in rural areas but also among followers of traditional religions. In addition, there has been a growing western health system that has been in existence for several decades, which the state supports, but in which some international aid organizations also make their contribution.

In the pre-colonial period, as everywhere in tropical African countries, there was no health system comparable to that in Europe. As a rule, traditional priests were responsible for caring for the sick. They treated diseases with a combination of rituals and herbs. In addition to spiritual healing, physical ailments were also regularly treated with herbs and similar natural healing agents. Mainly in the rainforest areas there are still many plants that have healing effects. The wound healing was partially supported by a mush of tree bark and herbs, herbal teas and envelopes used in internal diseases. There were natural remedies that were used as antidotes or were used to stabilize pregnancy.

These traditional healing methods have their place to this day, especially in rural areas. Even after Islam arrived in the 14th century and after Christianization by the missionaries, the traditional belief in the healing arts of priests and herbalists did not disappear from the lives of Ghanaians. Even Christians or Muslims often prefer to seek out a traditional healer when they have an illness.

The Association of Traditional Healers was founded in Nsawam in the Greater Accra Region in the 1960s . Here the role of traditional healers in Ghana's health system is being worked on.

It was not until the missionaries of the nineteenth century that western medicine was introduced to the Gold Coast colony . Until after the First World War , the missionaries remained the only organized contact points for Western medicine for the Ghanaians. In the colony, the colonial rulers paid no particular attention to health care. In earlier times the colonial powers saw little point in the health of women in particular, as well as in medicine for children. Men were considered to be the most sought-after workers. For them, efforts were made to heal wounds, for example, so that the workforce could be regained quickly.

Medical care by missionaries, churches and other religious communities is still very important today. Although the Ghanaian state has developed the health system in the cities well, the health system in rural areas and in the north is still dependent on Western aid and facilities. Catholic hospitals have been set up in Tamale and Sunyani , and a medical facility has been opened in Efiduasi Asokori by the Ahmadiyya Muslim Community . The Presbyterian denomination has set up a small hospital in Agogo, Eastern Region . Under Governor Frederick Gordon Guggisberg (1919–1927), the British colonial rulers first made major efforts to offer Western medicine to Ghanaians. Guggisberg developed a ten-year plan that included planning the expansion of the cities, supplying the population with clean water and setting up hospitals. Ghana's first official, also training hospital was opened in what was then the Gold Coast in 1925 under Governor Guggisberg.

Since the Second World War , the focus has been increasingly on health care. International aid organizations such as the WHO and UNICEF also set up aid programs and financial budgets to equip the health system according to Western standards. The standard of the hospitals set up at this time clearly showed the lack of financial strength and many Ghanaians still did not have great faith in the unfamiliar methods. Traditional medicine continued to play a major role.

In principle, Ghana is not a country that suffers from a shortage of food due to drought or other problems. The unequal distribution of food is a problem, however. In 2000, around 20 percent of children under five were undernourished. However, this number has improved significantly in recent years. In 1985 around 35 percent of children of the same age were considered undernourished.

The number of vaccinations has also increased significantly in recent years. In 2004, approximately 80 percent of children were vaccinated against diphtheria and polio . The maternal mortality rate has fallen since 1990 by about 740 of 100,000 births (about 0.74%) to about 540 of 100,000 births (about 0.54%), with the number of births that were monitored by medical personnel increased only slightly from about 40 percent in 1986 to about 47 percent in 2004.

Across the country, about 25.2 percent of women regulated their pregnancies by some method of birth control in 2005, with the condom as a contraceptive method in 2003 being about 12.7 percent.

Development of life expectancy in Ghana over time