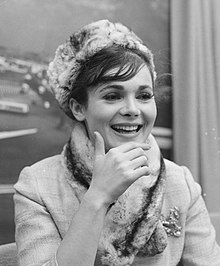 Gila Golan was born in Poland in 1940 . Her exact date of birth and maiden name is unclear as she was left behind by her Jewish parents at a train station near Krakow. A Roman Catholic family found the child and adopted it. From then on she was called Zoshia Zavatski . In 1951 she went to Israel with her adoptive family , where she called herself Miriam Goldberg from then on . After graduating from school, she became a member of a kibbutz and began studying to be a teacher.

During her studies, Goldberg was discovered by a photographer and featured as a model in the Israeli women's magazine La'Isha . In 1960 she was voted Israel's Maiden of Beauty in a national beauty pageant . In the same year, she took second place in the Miss World elections as the representative of Israel . At the same time, she changed her name to Gila Golan .

After her success in Israel, Golan went to the United States , where she also worked as a model and got a contract with Columbia Pictures . She got her first film role in 1965 as Elsa Lutz in Stanley Kramer's The Ship of Fools alongside stars like Vivien Leigh , Lee Marvin and Simone Signoret . It also became her best-known role. She played in films until the 1980s before ending her career in 1985.

Golan was married three times in total. Her first marriage to Alex Urban was divorced in 1968. from 1969 until his death in 1980 she was married to the businessman Matthew Bernard Rosenhaus. The couple had three children. Golan now lives in Florida with her third husband .