In general, the term golden chair is associated with one of the state insignia of the West African kingdom of Asante . It achieved general fame in connection with the Ashanti-British War of 1900, because one of the reasons for this war was the British demand for the return of the Golden Chair.

However, there were golden chairs as state insignia on the Gold Coast even before the state of Asante was founded, such as B. in Accra and Denkyira . National symbols, which were associated with gold as the main economic resource, played an important role in the process of state formation in the hinterland of the Gold Coast, particularly with regard to the socio-political environment of such a state.

With Denkyira's victory over Adansi in 1659 and some time later over Twifo , Assin , Wassaw , Aowin and Sehwi (or their regional forerunners), the most important gold-producing centers in the hinterland of the gold coast were transferred to Denkyira. The states of the Amantuo Confederation, i. H. of the political forerunner Asantes, were until the founding of the state of Asantes, or the subsequent Asante-Denkyira War (1699-1702), the mighty Denkyira to pay tribute.

In addition to the gold-producing centers, Denkyira also controlled the marketing of gold on the so-called "western trade route" due to its geographical location. H. to Bono-Manso and Begho in the north, from where the gold entered the Trans-Saharan trade, and to the Europeans on the coast in the south. Since the demand for the precious metal has been far greater than the supply in both directions since the beginning of trade, gold has also been by far the most important economic factor and the material basis of the state community for Denkyira since its foundation. The main reason for the Denkyira wars in the second half of the 17th century can certainly be seen in an increase in this economic base and the power position associated with it. So it is not surprising that the Denkyira royal family and nobility also used gold as a symbol of royal dignity and nation. Gilded shields and swords served as insignia of their own power. Foreign language advisors to the king received z. B. Walking sticks with gold heads, with which they legitimized themselves before other rulers. Denkyirahene (King of Denkyira) Boa Amponsem (r. Approx. 1677–1692) is said to have personally created gold ornaments for every ceremonial occasion and so u. a. also a golden chair as the insignia of the highest office he held in the Denkyira nation, which was also linked to a religious background, because the enthronement of a new Denkyirahene was above all a religious act. 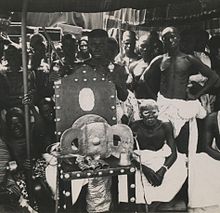 The golden chair of the Asantes 1935

The Golden Chair of Asante was presented to the public for the first time during the act of founding the Ashanti state by Okomfo (priest) Anokye (Anoki, Anochi), the close friend and advisor of the first Asantehene Osei Tutu when he was enthroned.

The Ashantin tradition tells the following story in this context: Anokyi appeared before Tutu one day and said: “Great chief, Nyame (the god of heaven and the creator) is pleased to give you the kingdom of Asante. When you convene the Grand Council with all the clan heads in the country, I will perform the ceremony that will confirm you as king of a new unified state. It is Nyame's will. ”Thereupon the Great Council was convened and Anokyi implored Nyame in a ceremony for a sign with which he would express his favor for Tutu as the new king (Osei) of a new confederation. When all eyes were directed upwards, a chair made of pure gold fell from the sky and fell on the floor right in front of Tutu's feet. Anokyi said, “This chair, by God's will, contains the soul of the Ashantine nation. No one other than the Asantehene is allowed to sit on this chair and no one is allowed to remove him from Asante, otherwise all Aschanti's misfortune will happen. "

The Asantes golden chair, even though it is Okomfo Anokyi's creation as such, is said to be an imitation of Denkira's golden chair. As the tradition mentions, the golden chair of Asantes symbolizes not only the unity, power and strength of the nation as such, but it also contained the soul of the Ashantine nation, i.e. In other words, due to its proclaimed divine origin, it also served as the shrine of the ancestors (in their entirety) through which they can be invoked. Therefore the golden chair should never touch either the head of a man or the bare earth. Because of the latter, the golden chair is always placed on a special elephant skin when it is placed on the ground. The same prohibition applies to the Asantehene, he is also never allowed to step on the earth with his bare feet, at least not during his tenure as a seat occupant. This ban on earth served primarily to underline the peace between the long-established, down-to-earth tribes, who were considered the actual owners of the land, and the immigrant Akan, and to put it on a religiously supported, permanent basis.

The fact that at the founding of the state, together with the “Golden Chair” of the Oyokohene (head of the Oyoko clan) and Asantehene, a “Silver Chair” for the Mamponghene (the chief of the city of Mampong, who is provided by the Bretuo clan) is presented indicates the end of a bitter power struggle between the two clans in the run-up to the unification of the state. As the occupant of the "Silver Chair", the Mamponghene was the viceroy of Asante, who also traditionally held the office of Krontihene (or Kontihene) in the past, i.e. H. that of the Commander-in-Chief of the Ashanti Armed Forces in the event that the King was personally absent.

Without this reconciliation between landowners and immigrants, as well as between the two most powerful aristocratic clans as rivals for power, a united Ashanti state structure would not have been able to survive in the long run. Symbols that underline this reconciliation therefore have some sociopolitical significance with regard to the development of a national feeling of unity.

Other golden state symbols of Asantes were z. B. the golden sword and the golden ax .

The Golden Chair, along with other national insignia, is shown to the public at the annual Akwasidae Festival in Kumasi . (The Akwasidae, also called Addai Kessie, is the Ashantic variant of the Adae festival that is otherwise common at the Akan .)

The Golden Chair of the Ga

Also in the Ga Kingdom of Accra on the eastern Gold Coast there was a golden chair in the 17th century as a symbol of royal power and the Ga nation.

However, the Ga's golden chair is not supposed to be made of solid gold, like its ashantic counterpart, but rather made of wood covered with gold leaf. Its height is about 1.5 m.

Legend has it that when the Kingdom of Accra was invaded by Akwamu in 1677 and fell, an Ewe man named Foli Bebe took this chair and took it back to his homeland east of the Volta. Here, in 1680, Foli Bebe founded the town of Glidji, near which, near a village called Zowula, the Golden Chair of the Ga was hidden and kept under lock and key. Another tradition says that Foli Bebe was a Ga chief under whose leadership they fled Accra and moved to Glidji. In yet another variant of the tradition it is said that among the Ga refugees of 1680 there was also the sister of the murdered king of Accra, who became the ancestor of the Little Popo kings after she became the Ewe king of Glidji, Foli Bebe, got married.

The Kingdom of Klein Popo was founded around 1687 in the coastal area of ​​today's Togo by Akan refugees from Elmina, Ewe refugees from Nuatja (Notsie, Nodschi) and Ga refugees from the lost Accra. 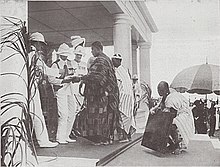 The symbolic handover of the Ga gold chair to the Prince of Wales, 1925

Although the residents of Glidji consider themselves an ewe, they have kept the saved national symbol of the Ga under lock and key since 1680. (At least this was still the case in 1948.) Since the news of the rescue of the former state insignia after Ewe, the Ga have repeatedly asked for their national symbol back, which the Ewe refused to do. It is said that a war campaign was even undertaken once to recover it, but it was extremely unfortunate for the Popo-Ga.

The handover of the Golden Chair of the Ga in a solemn act to the then Prince of Wales (later King Edward VIII ), during his stay on the Gold Coast in 1925 (see illustration), seems to contradict this tradition . However, this seems to have only been a symbolic handover, in which the prince was only given a smaller, gold-plated model of the chair as a sign of recognition of British sovereignty. Maybe a new production of the chair was handed over.

Be that as it may, the King of Glidji, although an Ewe himself, traditionally also offers sacrifices to the Golden Chair of the Ga, which he does on three different occasions: for the New Year, before he goes to war, and when he does the previous night dreamed of the chair.

The New Year festival takes place at the Glidji-Ewe every year at the end of the maize harvest season. H. at the end of the thirteenth lunar month of the Ewe, which usually falls in the third or fourth week of September. The Ewe call this festival " Epe-Ekpe ", the Ga celebrate the same festival under the name " Homowo ". However, it was and is permitted to the Ga people, provided they behave peacefully, to celebrate this festival together with the Ewe in Glidji and to offer their sacrifices to the golden chair, whereby everyone can pay homage to his own gods. Nothing has changed about this until today.