A horse-drawn motorized sprayer built in 1922

The company Grether & Cie. from Freiburg in Baden-Württemberg existed from 1873 to 1951 and operated a mechanical workshop with a metal foundry. From Grether & Cie. the world's first fire engine was built. 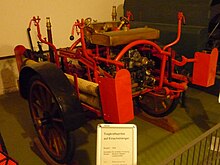 Portable pump on single-axle trailer from 1929; The engine and trailer are not from Grether & Cie

Grether & Cie. was founded in 1873 and operated a mechanical workshop with an attached metal foundry. A melting plant for the production of gray cast iron products was operated in the foundry hall. The operation also included a fettling shop and a hand molding shop, which were located in an intermediate hall. Furthermore, a forge furnace and a hardening shop were operated there. In addition to a forge, there was also an apartment on the large company premises; a core shop and a model carpentry shop were housed in a warehouse. There was also an associated boiler house. The company mainly manufactured hose couplings, hydrant trolleys, extinguishing machines, pumps and steam engines. Raw materials made of brass, steel, copper, lead and tin were used. Around 1900 the company had around 100 employees.

In 1910 the machine factory Grether & Co was awarded a gold medal at the trade and industrial exhibitions in Villingen .

In 1944, the company's production was closed due to the managing director's age, as it was not profitable. According to contemporary witness reports from the Grether / Kaffenberger family, the buildings were probably rented to a Swiss company from Rothrist that manufactured radiators . The company premises were completely spared from the bombing raid on Freiburg on November 27, 1944 .

Today, the “Grethergelände” in Freiburg's “ Sedanviertel ” houses apartments for around 100 people, for example the information center Strandcafé , a “self-administered place of communication”, Radio Dreyeckland and the central coordination of the nationwide active “ Mietshäuser Syndikats ”, adjacent to the “ Gretherpassage ”with various shops such as the“ Jos Fritz ”bookstore and offices.

The world's first fire service vehicle with an internal combustion engine was made by Grether & Cie. designed and built in 1902. The engine was supplied by the Deutz gas engine factory in Cologne. The fire brigade - truck had a wrought iron frame and achieving 18 km / h. The two-cylinder engine, which ran on petrol or alcohol, had an output of 15 hp and a magnet-electric ignition system. The fire engine was powered on the rear wheels; The motor was also installed there, which could be switched between driving and pump operation by means of a friction clutch. The driver's cabs and the controls were located at the front and rear of the vehicle, where there were two firefighters as crews.