Central balcony of the National Palace in Mexico City ; above it the bell of Dolores 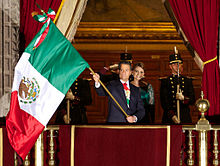 Mexican President Enrique Peña Nieto on the evening of September 15, 2013 on the balcony of the National Palace

The priest from the Miguel Hidalgo in the early hours of September 16, 1810 in the town of Dolores articulated Grito de Dolores (, Cry of Dolores 'or, cry of pain') marks the beginning of the Mexican War of Independence . Already in the constitution of Apatzingán of October 22, 1814, which came into force in a modified form after independence was achieved in 1821, September 16 was set as a Mexican national holiday.

A secret society ( Guadalupanos ) around Ignacio Allende and Juan Aldama had existed since around 1808 , who had set the goal of Mexico's independence from - French-occupied - Spain; this was joined by Miguel Hidalgo shortly afterwards. The plan was the simultaneous arrest of all Spaniards on October 1, 1810. When an attempt was made on September 13 to involve members of the Guanajuato garrison in the project, the secret society's plan was betrayed to the garrison commander. The conspirators were then to be arrested. However, when the Corregidor of Querétaro was informed of this project at the same time , his wife Josefa Ortiz de Domínguez , the later national heroine of Mexico, managed to inform the mayor, who was able to warn the conspirators.

At dawn on September 16, the conspirators decided to initiate a revolution. Hidalgo sounded the church bells while Allende and Aldama went to the prison to free prisoners. On the threshold of the Church of Dolores, Hidalgo called for a fight against the Spanish occupiers and initially gathered around 600 people. The exact wording of his speech, which was probably delivered with vehemence, is unknown; it ended with an exclamation that was passed down in the following years as follows:

Every year since the end of the 20th century, the incumbent President of Mexico has stepped onto the balcony of the National Palace in Mexico City at 11 p.m. on September 15 , where the bell of Dolores is hung, and repeatedly to the applause of a huge crowd consistent words:

Depending on the president's origin or other preferences, additional persons may be named. Then the national anthem will be sung by everyone present.