Guts Pie Earshot is a Cologne-based duo that is now based in Berlin and defines its style of music as a fusion of punk , techno , dubstep and metal .

Guts Pie Earshot was founded in Cologne in 1991 as a "punk band with cello " called Flowerhouse, which in turn emerged from the band Lucy Killed The Dragon. From the beginning, the connection to the squatter and site trailer park scene was relevant for the band. The musicians were influenced by bands such as The Ex , Chumbawamba , Dog Faced Hermans and No Means No . The concert venues were and still are very often small venues and squats connected with the do-it-yourself idea. In 1993 the band was renamed Guts Pie Earshot.

At that time it consisted of

Since 2004 the band has been on tour in twos in the line-up of Cybinski and Jacobi with cello and drums. Together, Cybinski and Jacobi have recorded the albums Chapter Two Volume One and Smart Desert , as well as an album each as Subvasion (together with Zurich BreakTech artist LN / A) and Dubvasion.

In December 2009 the band performed after dress rehearsals in front of audiences in Greece, Bonn and Cologne at SO36 in Berlin for the first time since 1998 with the former singer Anneke Pohl. On this occasion, a CD containing, among other things, cover versions and reinterpretations by various other artists or the band members themselves, was produced and given to the visitors of the concert. The remainder of the original 1000 copies of this CD was offered for sale. With this CD, a song was published for the first time, to which Pohl contributed the vocals. Since 2014 the band has been performing with the project "Outsourced Underground" together with the rapper Lena Stöhrffekt and the rapper wallpaper. 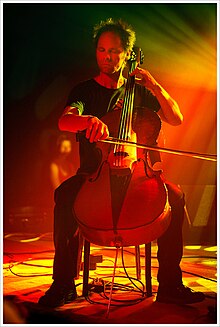 From the beginning it was a trademark of the band, through deliberate omissions (no guitar, later without vocals and samplers , then without bass and the omission of electronic "replacement devices" such as samplers or laptops) to bring the music to the limits of what is possible ( "Punk without guitar", " Drum and bass without bass", "Techno without technology", " Pop without singing").

The goal is to break out of existing musical norms in order to create something completely new, of your own, without degenerating into an intellectual construction. The quotes from punk and hardcore are implemented just as authentically as drum and bass, breakbeat , techno or classical influences .

As a dub invasion