A half-wave radiator is a transmitting antenna, the length of which is half of the wavelength to be emitted . Small half-wave radiators are therefore also called half-wave dipoles , their impedance is around 2000 Ω ( see also end-fed dipole ). 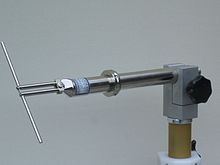 Half-wave radiators are designed as self-radiating transmission masts for UHF , VHF and partly also for short and medium wave . A half-wave radiator is hardly feasible for long wave due to the great height. This was only possible once for permanent operation, at the Konstantynów transmission tower ( Poland ), which was the tallest structure in the world until its collapse in 1991 with a height of 646.38 m.

A vertical half-wave radiator radiates equally in all directions in the direction of the earth's surface, while there is a minimum of radiation directly above it. In contrast to a quarter-wave radiator , almost all of the transmission energy is radiated parallel to the earth's surface, which is why half-wave radiators enable more economical operation of radio transmitters in the long and medium wave range (greater intensity of the bump with the same transmission power) and because of the low radiation in the angular range of 50 to 70 degrees ( Direction upwards towards the reflecting ionosphere ) can be used as a fading-reducing transmitting antenna .

Vertical rod antennas and antenna masts for VHF and short wave (radio services, CB radio, vehicles) are mostly quarter-wave radiators ; they require a shorter overall length, but a counterweight. Their base point impedance is lower than that of half-wave radiators, so they can be better adapted to cables and the voltage to earth or counterweight is lower.