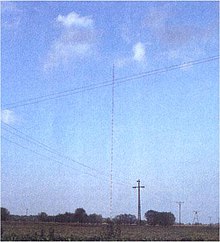 The former transmission mast in Konstantynów from a great distance

In 1931, a transmission mast was erected for the first time in Raszyn, near the town of Łazy in southwest Warsaw. After the Second World War, it was rebuilt in 1949 in the form of the "Raszyn" radio station with a 200 kW transmitter. This was soon expanded to a transmission power of 500 kW. However, the transmission power was not high enough to ensure good signal propagation throughout Poland. For this reason, a new transmitter should be set up. Its location should be near the geographic center of the new post-war Poland borders. An area should also be chosen that was not built on with industrial facilities or residential buildings.

The mast was officially put into operation on July 30, 1974. It weighed 420 t in total, was 646.38 m high and had two transmitters - each with an output of 1000 kW, which together with the mast provided a radiated output of 3000 kW ( ERP ). The radio station worked in the long wave range with a frequency of 227 kHz. The greatest benefit of the radio station was the direct transmission of signals from the 1st Polish program to Kazakhstan, Iraq, Iran, almost all of Europe and North America. All Poles who lived in these states at the time could use it to listen to Polish news on the radio.

View of the mast from a pardune

In 1984, numerous damage to the mast were in inspection work, the backstays found (guy wires) and Pardunenisolatoren that were caused by wind-induced vibrations. Repairing the damage caused great problems. At times it was even considered to replace the mast, which was considered a prototype, with an improved construction of the same height. However, due to the poor economic situation in Poland, this was not done. In 1988 the painting of the mast was renewed, but not to the desired extent because there was not enough paint available.

Collapse of the mast construction

The ruins of the tower after the collapse

On August 8, 1991 at 7:10 p.m. the mast collapsed during a repair to replace some of the guys. One of the two auxiliary ropes installed for this purpose came loose from the anchorage. The second rope then broke because the additional load was too great. The upper part of the mast broke apart and fell on the lower parts. The collapse lasted about 15 seconds.

The transmitter building and the voting house were not damaged when the mast collapsed. However, a crane truck from the Mostostal Zabrze company was destroyed in the process.

Inadequate maintenance over 17 years was found to be the cause of the accident. According to the actual process, the failure of a single, apparently defective part led to a chain reaction that destroyed the entire construction. To what extent the assembly work, a mistake in this or in a previous measure contributed to the collapse, remained unclear.

The time after the collapse until today

In September 1995 the Polish government commissioned Mostostal Zabrze to rebuild the mast at its old height. Although some preparatory work was subsequently carried out, such as strengthening the old foundations that were to be reused, the mast was ultimately not rebuilt. The main reason was protests from the local population, who feared that broadcasting would damage their health. Although there was no evidence of this and they were prepared to operate the transmitter with greatly reduced power in the future, a new area for the transmitter had to be found. This was finally found in the form of a former military training area southwest of Solec Kujawski , where a new long-wave transmitter was built between 1998 and 1999. The broadcasting station Solec Kujawski , which started operations on September 4, 1999 (225 kHz), uses a directional antenna as a transmitting antenna, consisting of a 330 m and a 289 m high transmission mast at a mutual distance of 330 m, both of which are grounded and, like the masts of the Deutschlandfunk in Aholming and Donebach , have a top feed .

With the commissioning of this system, the station in Raszyn resumed the broadcasts of the second program of Polish radio, which had been interrupted in 1991, on the long-wave frequency of 198 kHz. Its frequency has since been discontinued, until then it was broadcast alternately with Radio Parliament.

The tower at the former transmitter building, which was once used for program feed

Except for the mast and the feed line leading to it, all the structures of the former transmission system are still there. But today they are unused and are slowly decaying. From the mast itself, the circular foundation is still present immediately next to the still existing voting house, the anchor blocks to which the guys were attached, and some parts that were drilled into the ground when the structure collapsed. The hole in which the steel tube, attached to insulators inside the mast, ended, also still exists. There are plans to set up a technical museum in the former transmitter building, but so far there has been no official approval.

On the transmission mast area in Konstantynów there is a free-standing steel lattice tower, which belongs to the company TP EmiTel and was used for a radio link to Warsaw until the transmitter mast collapsed, via which the radio program was played. In front of the entrance there is a memorial with a cross, built by the "Organization of life security at the highest mast in Europe".

As far as is known, the collapsed steel structure was sold as scrap. The transmitter unit of Brown, Boveri & Cie. are for the most part preserved on site, even if they are no longer in an operational condition. They are unlikely to be used again. Parts of the redundant power supply, the artificial antenna, elements of the signal feed and parts of the HF feeder in the transmitter building were dismantled. They were under constant surveillance until 1999. Since 2001, all buildings / objects have been managed by TP SA , which is limited to protection against vandalism.

Graphic showing the range of the transmitter

The mast designed by Jan Polak in 1974 was a self-radiating transmission mast insulated from earth for a voltage of 120,000  volts and weighing 420 t. It served the 2,000 kW long wave transmitter ( transmission frequency : 227 kHz, from February 1, 1988 225 kHz) of the Polish radio as an antenna in the form of a half-wave radiator . The transmitter mast, standing on a two-meter-high insulator , was designed as a framework construction made of tubular steel and had a cross-section in the form of an equilateral triangle with a side length of 4.8 m. The diameter of the steel pipes at the corners was 24.5 cm, the wall thickness of which decreased from 34 to 8 mm with increasing height.

The mast construction consisted of 86 elements, each 7.5 m long and guyed in five levels with guys 50 mm in diameter. Each of the guys was attached to a separate anchor block on the ground. Although the use of guys divided with insulators is problematic with very high masts, because in this case the insulators have to be dimensioned for much higher voltages due to static charges on the rope sections than arise during transmission, and surge arresters that are expensive to maintain are necessary on the insulators, at least the guys on the lowest levels were built in this way. The guys and insulators of the mast together weighed 80 tons. An elevator was installed inside the mast for better access to the flight safety lights and other components of the mast . This elevator had a maximum travel speed of 0.35 m / s, so it needed more than 30 minutes for an ascent.

The mast stood on three insulator columns, each consisting of two meter high porcelain insulators arranged one above the other and placed on the foundation plate of the transmitter mast in the form of an equilateral triangle. These pillars insulated the construction from earth for a voltage of up to 120,000 volts. The transmission energy to be emitted was fed in at the foot point.

Inside the lower half of the mast was a steel tube attached to insulators, which was grounded at its lower end and electrically connected to the mast construction at a height of 328.68 m until the transmission frequency was changed from 227 kHz to 225 kHz, then at a height of 334.18 m was connected. Together with the lower half of the mast, this tube formed a blocking circuit for the transmission frequency. However, it made it possible for electrostatic charges to flow away from the mast construction, which can be considerable even in fine weather with such a high construction insulated from earth. Inside this tube were also the cables for supplying the air traffic control lights and the elevator, as this was the simplest way of supplying the mast, which was under high-frequency high voltage during transmission, with electrical energy.

The transmission energy to be radiated was fed to the mast from the transmitter building via an approximately 600 meter long overhead trap line .

The station was supplied with power via two single-circuit 110 kV lines. Despite the high energy requirements of the system (estimated 6000 kW), this was greatly oversized and was intended to make the power supply of the transmission system, which was classified as very important, as reliable as possible.

Additional flight safety lights were installed on some of the smaller watchtowers to better mark the tensioning area of ​​the guy ropes at night. 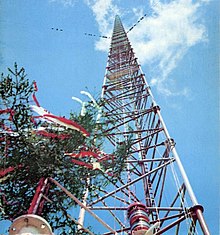