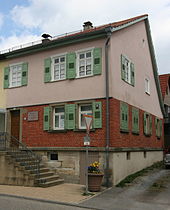 The house Haller Straße 3 in Wüstenrot in the district of Heilbronn , also called Georg-Kropp-Haus , is a semi-detached house from 1750 in a simple half-timbered construction with an assumed year of origin of 1750. On May 16, 1996, after extensive renovation work in the house, the Bauspar Museum inaugurated. The house is the first stop on the building society history trail through the village of Wüstenrot .

Around 1750 the building was erected in simple half-timbered construction as a small agricultural property together with the northern half of the house, the agricultural part (today Haller Straße 1). In 1850 the building was divided into a semi-detached house . As part of the division, major renovations such as the raising of the roof to the street side took place beforehand .

In 1857 master locksmith Gottlieb Föll bought "half of a wooden house with a vaulted cellar ... on Haller Straße" from Kronenwirt Carl Wenzel. With this note in the land register of the municipality of Wüstenrot, the house was put on record.

The next entry in the land register is from January 15, 1920. Pauline Kropp, a writer's wife from Heilbronn , bought the house at Haller Strasse 3 from Elise Weber, master shoemaker's wife, for 14,000 marks. Georg Kropp , the founder of the GdF Association of Friends , signed the sales contract as "consenting husband". The move of the Kropp family from Heilbronn to Wüstenrot on December 31, 1922 is recorded in the registry office in Wüstenrot. On February 16, 1924, the Association of Friends, founded in 1921, was transformed into a building society based in Wüstenrot. The one-room company had its first headquarters on the upper floor of the Haller Straße 3 building. As early as May 1925, with the growth of the Bausparkasse, the Kropp family moved a few streets further into the former Löffelhardt Villa Daheim .

Georg Kropp's daughter Charlotte bought the house at Haller Strasse 3 next to meadows and farmland for 5,400 marks on December 4, 1931, only to sell it to private individuals on October 27, 1936. Charlotte Kropp's husband, Erwin Boesler, was on the board of directors from 1946 to 1972, and from 1965 chairman of the board of Bausparkasse Schwäbisch Hall .

On February 24, 1983, the Wüstenrot community acquired the house, which was threatened with demolition. The community renovated it in 1994 and set up a small building society memorial and the community library on the ground floor. In 1995, a finding was made by the Baden-Württemberg State Monuments Office. The house at Haller Strasse 3 was the founding house of Germany's first building society and became a cultural monument for reasons of local history and science . With financial support from the Wüstenrot Foundation, it received extensive structural repairs, together with a historical exhibition on building society savings. The state government of Baden-Württemberg decided on August 4, 1995 to include the museum project in the Rural Areas Development Program (ELR).