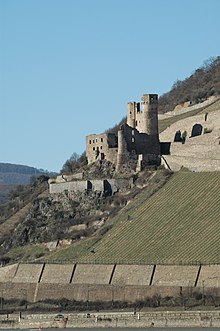 Ehrenfels Castle on the Rhine

A hillside castle is named after its location in the area and is located on the slope of a mountain below the summit. It is thus a kind of hilltop castle . The type of building appeared in the second half of the 11th century.

Castles of this type were particularly endangered by attacks from the higher ground, which is why they were often specially protected there by a shield wall or a keep , often also by a combination of these two passive defensive structures.

The advantage of a hillside castle was the much lower well depth . The construction of the castle fountain was the most expensive as well as the longest part of the castle construction for many castles. Therefore, the water supply was often ensured with the help of donkeys as transport animals via specially created donkey paths.

In the German low mountain ranges there are numerous hillside castles, especially on stream and river valleys such as B. on the Middle Rhine . They were often built as toll castles and were close to the trade routes. Overall, however, they make up less than 1% of all types of castles that are distinguished in castle research on the basis of their topographical location, because they had enormous strategic disadvantages due to the impending elevation on the mountain side.

Examples of hillside castles are Katz Castle in Sankt Goarshausen , Ehrenfels Castle in Rüdesheim and Rietburg near Rhodt in the Palatinate .