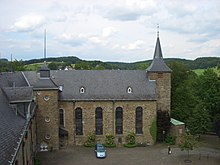 The Hückeswagen Local History Museum is housed in the eastern hall building in Hückeswagen Castle. After an unknown fate in medieval and subsequent times, this was established as a Catholic church in 1683 after the Reformation and subsequently provided with large, continuous windows. After a false ceiling it has been used in the upper part as a council chamber and in the lower part, after years of free use, since 1963 as the local museum of the town of Hückeswagen .

The thick, sloping gate tower is one of the components on which the design language of the late Romanesque - early Gothic period of origin of the castle can be understood. It had a double function as it contained the inner castle gate and the castle chapel. Today the old gate tower forms the museum entrance and houses the chapel in the museum's catchment area at a historical location on the upper floor . This eastern tower also served as the city archive until the two archives Hückeswagens and Wipperfürths were merged in 2016.