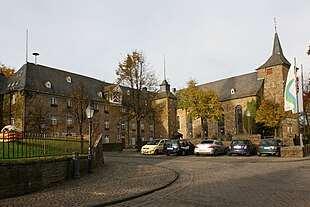 The Hückeswagen Castle stands on a mountain spur ( 308  m above sea level ) in the middle of the town of Hückeswagen in the Oberbergischer Kreis .

In the centuries that followed, the castle was mostly in poor condition until it came under the city's ownership in 1884. The city administration and the local museum were later housed there. It was not until 2005 that parts of the city administration were outsourced to the community center at Etapler Platz, which was built on the former main station site.

One of the most striking parts of the complex is the keep, which is also known as the “rogue tower”. It was probably built in the first third of the 13th century. The oldest view of the castle by Erich Philipp Ploennies at the beginning of the 18th century shows the tower, at 23 meters, much higher than it is today. The reduction to two floors took place during renovation and security work at the beginning of the 19th century.

Surroundings of the castle

The fortified castle square can be reached by vehicles via the street Auf'm Schloß , which is a continuation of the market street leading through the historic old town . On the plaza, which is enclosed by a wall, there is a historic fountain that was extensively renovated in 2007. Sidewalks also lead up to the castle: either from Bahnhofstraße through the so-called Schlosshagen (tree cover with sidewalks) or alternatively via the steep “Marktberg” street, which branches off from Islandstraße. Opposite the palace square is the palace garden with rose gardens. Since 2002, this has contained a historical pavilion, which was dismantled and stored in 2018 because it is in need of renovation. The Pauluskirche is right next to the castle . The Steengaden , a remnant of the former fortification, is located below the castle on the Iceland road.

Castles and palaces in the Oberbergisches Kreis