The Yeshivat haKotel above the excavation site is a striking architectural accent in Jerusalem's old town.

The Herodian Quarter (הפרוור ההרודיאני) is an ancient villa district in the old city of Jerusalem . The archaeological site is open to the public as the Wohl Museum of Archeology ; the entrance is at Ha-Kara'im St. 1. The archaeological museum forms a unit with the Wohl Torah Center ( Yeshivat ha Kotel ) built above it , a well-known training center for Judaism with a modern Orthodox orientation.

The Herodian Quarter is an area of ​​around 2700 m² living space from Herodian times (37 BC to 70 AD), part of the area that Nahman Avigad has archaeologically examined in the Jewish quarter of the old town. A much smaller area, the house of the Qathros family , is also accessible as a museum. Other areas of the Herodian upper town were modernized according to their archaeological investigation. All the buildings of the Herodian upper city were destroyed by a major fire when the Romans conquered Jerusalem in AD 70.

Graffito of a menorah.

One of the most interesting finds made by Avigad in 1969 in the Jewish Quarter is the graffito of a seven-armed candlestick ( menorah ) , which consists of two pieces about 25 × 15 cm in size . The two fragments come from the filler material of the floor in a house that was built in the 30s of the 1st century AD. Nothing more can therefore be said about the original location of the depiction and what may have decorated it.

In any case, the graffito comes from a time when the original was still in its place in the Jerusalem temple . This is interesting when looking at the base of the chandelier. The well-known depiction on the Arch of Titus in Rome served as the basis for modern reconstructions, but it is questionable whether the massive hexagonal base actually belonged to the menorah or was just its base to be carried around during the triumphal procession.

Rachel Hachlili assumes that the menorah in the temple had a heavy, cone-shaped base, which was also necessary for the candlestick to stand stable. In their reconstruction, the graffito from the Herodian quarter is of particular importance because it corresponds to a (of course, quite small) menorah depiction on a Hasmonean coin.

Small finds document the prosperity of the residents of the Herodian quarter.

Because, unlike ceramics, stone vessels do not accept ritual impurities , they were often used in priestly households.

In this building, the basement with a floor area of ​​around 17 × 21 m has been preserved, but it is not fully visible in the exhibition. Three cisterns ensured the water supply. Four mikvahs in simple or representative designs show that ritual purity was of great importance in the lives of the residents. (They were probably priestly families who were of a high standard in this regard.) In addition to the four mikvahs, there is also a room with a kind of bathtub, which “makes it clear that personal hygiene and cultic purity were two entirely different things . “The bathrooms are grouped around a central, large room and anteroom.

A multi-colored, almost square mosaic in the anteroom is remarkable: the edge is formed by a red and black wave pattern (“ running dog ”), the central, partially destroyed motif is a rosette. Palm trees and a perfume bottle are depicted in its four spandrels. In accordance with the ban on images , the residents of the quarter avoided depicting people or animals when furnishing their apartments.

These are two independent, smaller apartments. The southern residential unit is cut up by a Byzantine sewer system. In the central room, furnishings from various locations are presented, including a round and a rectangular stone table that are particularly striking.

Little is left of this once luxurious complex: fragments of columns, a colored fresco fragment and a stone floor laid using the opus sectile technique.

The exhibition presents architectural fragments that were found in various places in the rubble; that fits well because all of these pieces document the same living culture of the Jerusalem upper class. 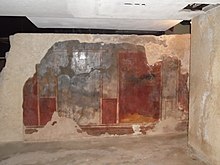 Wall decoration in the stately villa.

The name palace ( palatial mansion ) seems appropriate for this building with around 600 m² of living space . Representation and living rooms are grouped around an inner courtyard on the ground floor, while there are cisterns , storage rooms and mikvehs in the basement .

The western area of ​​the ground floor is impressive, with walls that are up to 3 m high. The walls of the large hall (6.5 × 11 m) imitated bosses with white stucco , an interior design for which there is comparable material in Pompeii . The excavators discovered an older wall painting with oriental flower motifs.

The vestibule of this hall was particularly badly damaged by the fire in the destruction of Jerusalem; Nevertheless, the colored wall painting was preserved better than anywhere else in the Herodian Quarter. This wall decoration is also reminiscent of rooms in Pompeii.

This former villa presents itself to the visitor as the excavators uncovered it; the finds were therefore not regrouped, the rooms were not furnished with finds.