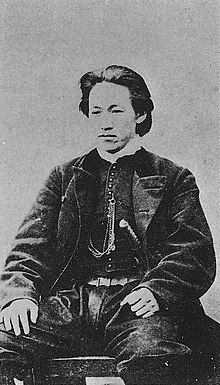 Hijikata Toshizō ( Japanese 土方 歳 三 ; * May 31, 1835 in Hino ; † June 20, 1869 ) was the deputy commander of Shinsengumi , a Japanese police unit in Kyōto that tried to establish the Meiji government in the middle of the 19th century Prevent Japan.

Hijikata was born in 1835 as the youngest of six children in what is now Hino, a suburb of Tokyo , Japan. His parents were farmers. Hijikata is said to have been a very spoiled child who behaved badly towards everyone but his friends and family. That changed in 1864 when he prosecuted the execution of a swordsman from the Aizu clan who was forced to commit seppuku (ritual suicide) for his loyalty to the shogunate . Hijikata is said to have cried in public at his funeral.

When his older sister married into a wealthier family, Hijikata's brother-in-law arranged for him to work as a medicine seller. On this occasion he met Kondō Isami . He was then able to learn sword fighting in the Dōjō Kondō Shusuke style of the Tennen Rishin Ryū school. When the execution of Kondō Isami and other students of the Dōjō in 1863 caused them to leave for Kyoto, Hijikata joined them. They wanted to fight to keep the Shogun in power . Hijikata joined the Rōshigumi , which later split into two groups, and was under the leadership of Kondō Isamis, Serizawa Kamos and Niimi Nishikis corps leader. In Kyoto, the group should ensure peace and order. Commanders Serizawa and Niimi increasingly abused their position, and when Hijikata found evidence against Niimi in these matters, he forced him to commit seppuku . Serizawa, however, was murdered by members of the Shinsengumi, so that Kondō Isami remained as the sole leader of the Shinsengumi with Hijikata Toshizō as vice-commander.

The strict laws of Shinsengumi for Kyōto, which were mainly drawn up by Hijikata, had to be followed with rigor. Toshizō was known to be very hard with his blade, the Izuminokami Kanesada , and was soon dubbed "Devil of the Shinsengumi". Hijikata also set strict guidelines within the Shinsengumi. Deserters and traitors were forced to commit seppuku. Yamanami Keisuke , a very close friend of Hijikatas, also experienced this fate when he tried to leave Shinsengumi in 1865. Evidence for Hijikata's toughness can be found in Nagakura Shinpachi's Jitsureki dan , later also published under the title Shinsengumi Tenmatsu Ki , in which he wrote the history of the Shinsengumi from his point of view as a corps leader.

After the shogun had been forced to give up and ultimately returned power to the emperor, the emperor ushered in the time of the Meiji government. Immediately the Shinsengumi became the target of the imperial army . Kondō Isami was captured and executed in April 1868. Toshizō then led the Shinsengumi in their final fight. Realizing that he was fighting a losing battle, he told a doctor, “I will not fight to win. Now that the Tokugawa government is on the verge of collapse, it would be a shame if no one were willing to go down with it. That's why I have to go. I will fight the best battle of my life to die for the country. "

On June 20, 1869, he was killed while fighting by a bullet that shattered the lower part of his spine. It is not known where he was buried, but it is ever a memorial stone in his honor and Kondō Isamis near the JR -Bahnhofs Itabashi in Tokyo.

Hijikata is known to have authored the Hogyoku Haiku collection under the pseudonym Hogyoku , which is currently in the Hijikata Toshizō Memorial Hall in the house where he was born in Hino.

The last poem Hijikata Toshizō gave Ichimura Tetsunosuke shortly before his death was as follows:

In German: "May my body fall apart in the island beach Ezos - my spirit watches over my master in the east"

The story of Hijikata and Shinsengumi is very popular in Japanese culture and a number of books and anime have been written about it. The character of the vice-commander plays a leading role in the mangas Peace Maker Kurogane , Hakuōki and Kaze Hikaru , for example . He also served as a template for Shinomori Aoshi in Nobuhiro Watsuki's manga Rurouni Kenshin .

He appears in the manga or anime Gin Tama and in the animes Bakumatsu Kikansetsu Irohanihoheto ( 幕末 機関 説 い ろ は に ほ へ と , "The confirmation of the end of the shogunate is only two steps behind the door"), Mutsu Enmei Ryuu Gaiden: Shura no Toki , Drifters (ド リ フ タ ー ズ Dorifutazu) and Katsugeki / Touken Ranbu (活 撃 刀 剣 乱舞) on. Golden Kamuy (Japanese ゴ ー ル デ ン カ ム イ Gōruden Kamui) plays on an alternative timeline in which Hijikata is imprisoned in Abashiri after his alleged death in order to later look for the Ainu's gold treasure .