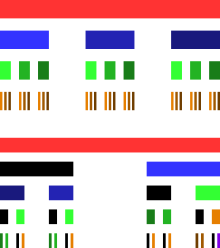 Example: Visualization of a homeomorphism between Cantor spaces . Homeomorphism from in to . The colors indicate how subspaces of sequences with a common prefix are mapped onto one another.

One can clearly imagine a homeomorphism as stretching, compressing, bending, distorting, twisting an object; Cutting is only allowed if the parts are later put back together exactly at the cut surface.

and be topological spaces . A mapping is a homeomorphism if and only if:

Homeomorphisms can be characterized as follows: If and are topological spaces, then for a bijective, continuous mapping they are equivalent:

The third condition of the continuity of the inverse function is essential. For example, consider the function

This function is continuous and bijective, but not a homeomorphism. The inverse function maps points close to to widely spaced numbers near and ; vividly, the circle would be torn at the point and then rolled flat to form an interval.

If one restricts oneself to certain types of topological spaces, then the continuity of the inverse mapping of a bijection  already follows from the continuity of . For example, a continuous bijection between compact Hausdorff spaces is already a homeomorphism. The following serves to prove this statement

sentence
If there is a compact and a Hausdorff topological space, then every continuous bijective mapping is a homeomorphism.

proof
Be the reverse figure and complete, it is to show that is complete. As a self-contained subset of a compact is compact. Since continuous images of compact quantities are compact again, is compact. Since compact sets are closed in Hausdorff spaces , what ends the proof is closed.

If two topological spaces are homeomorphic, then they have exactly the same topological properties, these are properties that can only be expressed by the underlying set and the open or closed sets defined on it. This is because a homeomorphism is by definition a bijection between the underlying sets and between the systems of open sets. Examples of such properties are compactness , cohesion , separation properties and many more. Evidence that it is a topological property can be difficult, especially if the original definition uses additional structures. An example of such a property is metrizability , here the Bing-Nagata-Smirnow theorem shows that it is a topological property. Eberlein compactness is another non-trivial example.