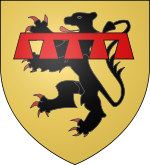 Humbert IV. († 1189/90 before Acre ) was an heir of the Beaujeu rule and iure uxoris a lord of Montpensier (Humbert I) from the house of Beaujeu .

He was a son of Humbert III. von Beaujeu († around 1192) and a daughter of Count Amadeus III. of Savoy .

He was married to Agnes von Thiers, the heiress of Montpensier, with whom he had two children:

Humbert often argued with his father about joint rule in Beaujeau. To distinguish himself from his father, he was called "the younger". He took part in the Third Crusade with his son-in-law , and died during the siege of Acre . Because he died before his father, his son Guichard IV followed him in Beaujeu.