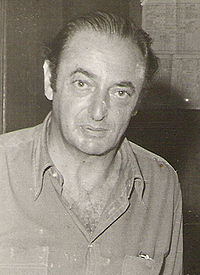 Humberto Costantini was born the only child of Jewish-Italian immigrants. He grew up in the Villa Pueyrredón district . His first marriage to Nela Nur Fernandez had three children, Violeta, Ana and Daniel. He also graduated as a veterinary surgeon in Buenos Aires and later practiced in a rural area near the city of Lobería (Province of Buenos Aires). During these years his two daughters were born. In 1955 he returned to Buenos Aires with his family and worked in various jobs, including a. Veterinarian, salesman, ceramic potter and researcher in the pharmaceutical industry . Shortly after returning to Buenos Aires, his son Daniel was born. 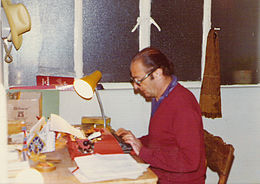 Humberto Costantini: "nailed to the chair"

While pursuing various occupations, he also pursued his passion for writing. He accepted correction work and wrote regularly and with iron discipline "nailed to the chair," as he often emphasized. His first book, the short stories De por aquí nomás , was published in 1958. From this moment his writing career began, in which he dealt with a wealth of literary genres: short stories, poems, plays, novels - up to his last work Rapsodia de Raquel Liberman . This unfinished trilogy, written in biblical rhyme form, is about a Jewish prostitute who is kept like a slave by the Zwi-Migdal , but rebels and has to pay for it with her life.

The recurring theme, the literary axis of the writing and life of Humberto Costantini, is also evident here: " To do the right thing in front of Jehovah's eyes means to have respect for one's own destiny," as he liked to say. This attitude of doing the right thing brought him into difficult situations in many moments of his life and gave him confrontations with those in power, as did his protagonist Raquel Liberman. Costantini was a victim of political persecution and ended up on black lists.

With this attitude, Cacho, as his friends called him, moved naturally and without making a big fuss, as it were the only viable path through his life. This basic attitude generated an enormous amount of amicable loyalty, but provoked, among other things,. U. rejection and hatred. For Costantini there were no middle paths, no gray areas. He made his resolute determination more than clear in public.

From youth he was involved in political movements and since his student days he directed his activism mainly to the fight against fascism of the " Alianza Libertadora Nacionalista ", became a member of the Communist Party, from which he later distanced himself because he was the pro -Soviet course and the bureaucratization not supported. “To do the right thing ...” naturally also explains his deep admiration for Ernesto “Che” Guevara . In the 1970s he became involved in the revolutionary left movement, together with other writers such as Haroldo Conti and Roberto Santoro , who were kidnapped during the Videla dictatorship and are still today considered "disappeared" ( desaparecidos ). On the run, hidden in secret places and at the most impossible times of the day, he wrote his first novel De Dioses, hombrecitos y policías , which was published in Mexico and which eventually won the prestigious Premio Literario Casa de las Américas . Julio Cortázar later said of this novel , “I really like what Humberto Costantini is doing and I see a great future for his work. For me he is an important writer ”.

In 1976 Humberto Costantini went into exile in Mexico City . There he continued his literary work and won other literary prizes. He endured the exile in the knowledge that "you have to be ready to flee with your loved ones every day, as if the city were about to be hit by a typhoon". He gave public literature courses, made weekly radio broadcasts and, as he says after his return from exile, fell in love with the awareness "at last I was alive ...".

Another of his passions was tango . Admirer of Osvaldo Pugliese , of Aníbal "Pichuco" Troilo and Eduardo Arolas , Costantini was an avid dancer and singer, an expert in tango texts and the history of tango. At meetings in private circle of friends, the guitar was never missing, which accompanied his strong, devoted voice to the milonga "Marieta" or to the tango "El Adiós de Gabino Ezeiza ". He composed tango texts and milongas, some of which were recorded.

In 1983 he returned to Buenos Aires after exactly seven years, seven months and seven days in exile. There he experienced the beginning of the democratic spring in Argentina .

His literary work has been published abroad and in many languages. a. in english, finnish, hebrew, polish, russian, swedish and czech. The novel Von Göttern, Menschlein und Polizisten was published in German in 1984 ( Verlag Volk und Welt / Ostberlin).

Humberto Costantini developed cancer. He used the short phases of health improvement between chemotherapy treatments to write under high pressure. The night before his death he was still working on his last novel, La Rapsodia de Raquel Liberman , as he did every day , a trilogy of which he can only complete two volumes. This work remained unpublished.