Incredible Hulk Coaster in Universal's Islands of Adventure ( Orlando , Florida , USA ) is a steel roller coaster of the Sitting Coaster model by the manufacturer Bolliger & Mabillard , which opened on May 28, 1999. On September 8, 2015, the attraction was closed, given a general overhaul and reopened in 2016.

With its friction wheel-driven launch, it is the only roller coaster from the manufacturer that has been delivered with this launch system.

In 2021, an identical Transformers- themed facility is to be opened in Universal Studios Beijing, China . 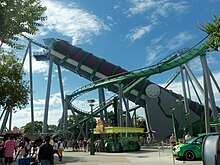 Because the launch does not take place horizontally, but on an incline, the order of the contained inversions differs from other orbits of this model. After the station you are slowly pushed into the 46 m long tunnel (acceleration chamber) . A sword attached below the train engages a series of friction wheels. 230 individually controlled electric motors ensure uniform and synchronous acceleration. The engines, which have an output of 8 megawatts per shot, accelerate the train from 0 to 64 km / h in about half the tunnel distance within 2 seconds and then drive through the zero-g-roll at a height of 34 m .

The system draws its enormous electricity requirements from the city of Orlando. A special dynamo system was installed to compensate for disturbances in the power supply network, which the motors require each time they are fired (which occurs every 90 seconds). Here, in a purpose built generator space is less than 5 ton be flywheels (fly wheel) by electric motors before added to the actual firing in rotation. Dynamos connected to it then compensate for the immense power demand in the power supply network during the launch.

The following 32 m high descent is very long and leads over a small lake before the train drives through the Cobra-Roll , which follows a loop . After the train has passed a corkscrew and another loop, a block brake that runs through the center of the second loop slows it down a little. Another corkscrew was installed in front of the final brake.

Incredible Hulk Coaster trains have eight cars each. Four people (one row of four) can be seated in each carriage. The passengers must be at least 1.37 m tall to be allowed to ride. Shoulder straps are used as a restraint system.