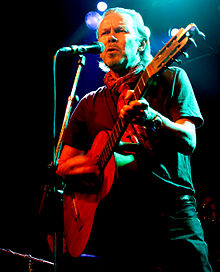 His first release was in 1981, J. Karjalainen ja Mustat lasit ( J. Karjalainen and the black glasses ) on the Finnish music label Poko Rekords , where his subsequent recordings were also released. While the earlier albums were heavily influenced by pop to hit music, today's songs can be ascribed to the blues . Karjalainen traveled in the footsteps of Finnish emigrants through the north of the USA and picked up on their musical tradition. He accompanies his songs on the guitar and often on a banjo . There are also acoustic instruments such as the accordion and double bass. Karjalainen's rough voice is characteristic of the three albums on "American Finnish folk songs" that were released between 2006 and 2010.