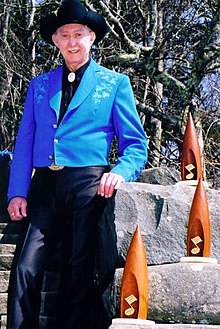 Jack Henry Greene (born January 7, 1930 in Maryville , Tennessee , † March 14, 2013 in Nashville , Tennessee) was an American country musician and singer. His greatest successes were There Goes My Everything and All the Time .

Jack Greene, a native of rural Tennessee, played as a drummer and guitarist in various bands since the late 1940s before two years of military service interrupted his career. Upon returning to civilian life in 1952, he joined the Peachtree Cowboys , with whom he stayed for nearly a decade.

In 1962 Ernest Tubb was looking for a musician for his backing band Texas Troubadours . Greene prevailed against a large number of applicants, not least because of his versatility. Thanks to his height, the audience quickly became aware of the new band member. Soon he was known as the "Jolly Greene Giant" ("happy green giant").

As a member of the Troubadours, Greene has had numerous appearances in the Grand Ole Opry . In 1964, Dottie West chose him as a duet partner for the song Love Is No Excuse . Ernest Tubb gave him several opportunities to distinguish himself as a lead singer. One of the songs he sang, The Last Letter , was so popular that Decca released it as a single. With this title Greene achieved his first placement in the top 10 of the country charts.

Greene's final breakthrough came in 1967 when he had his first number 1 hit with There Goes My Everything . The Dallas Frazier song stayed at the top of the country charts for seven weeks and was voted Single of the Year by the CMA . Jack Greene was also named best singer of the year. In the Billboard Pop Charts , the single reached number 65. It was his only song that could place in the pop charts. The album of the same name was Greene's only placement in the top 100 of the LP charts, where the album reached number 66. In the country area, however, he continued to have great success.

In 1967 he had another number 1 hit with All the Time . On December 23, 1967 Greene became a regular member of the "Grand Ole Opry". His mentor Ernest Tubb introduced him personally to the show. In 1968 Green continued his hit streak with You Are My Treasure , which topped the country charts in April 1968. His last positions at the top of the country charts came in 1969 with Until My Dreams Come True and Statue Of A Fool

In 1969 he teamed up with Jeannie Seely, who was previously a member of his backing band. In the 1970s the two had a number of smaller country hits and appeared regularly in the Opry. Her biggest success was in 1970 Wish I Didn't Have to Miss You , which moved up to number three on the country charts and was Greene's last entry in the top 10 of the country charts. With their backing band "The Jolly Giants" they were the first country band to give a concert in the rooftop lounge of the "King Of The Road Hotel" in Nashville in 1972 and in 1974 a concert in "Madison Square Garden" in New York. Greene and Seely's collaboration lasted until the end of the decade. Most recently she was accompanied by a four-piece band called "The Renegades". In 1979 Greene switched to the Frontline label, where he had a few smaller hits in the early 1980s.