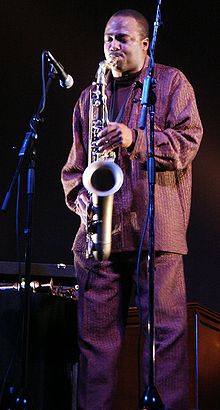 James Carter (born January 3, 1969 in Detroit , Michigan ) is an American saxophonist and representative of the modern creative style.

Carter became known in the 1990s for his unorthodox approach to jazz. In addition to traditional jazz standards , he also lets his own compositions heard on his CDs, in which he creates his own sound through the use of growling , large interval jumps and other atypical sound effects. Unlike most jazz saxophonists, Carter plays the full range of saxophones, namely bass, baritone, alto, tenor, soprano and F mezzo saxophone. He also plays bass clarinet and flute.

His album Jurrassic Classics received the annual prize of the German Record Critics' Prize in 1995 .