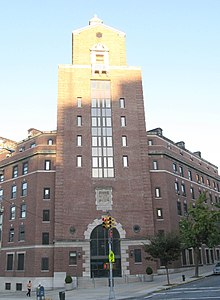 The Jewish Theological Seminary of America ( JTS ) is a rabbinical institute founded in New York City in 1886 by Alexander Kohut and Sabato Morais in the tradition of Conservative Judaism and as such the first of its kind in the USA .

Today it is the academic and spiritual center of conservative Judaism in the United States and, by its own claim, the world over. The model was the Jewish Theological Seminary in Breslau , the first academic training center for rabbis in Germany.

The Jewish Theological Seminary has five training centers, one of the largest libraries in the world in the field of Jewish studies and a Jewish museum . In 2008 about 3,000 students studied there. Chancellor is Arnold Eisen.