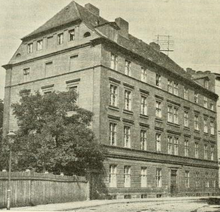 The Jewish Theological Seminary in Breslau (before 1904) 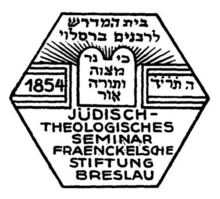 Logo since 1928, with the (Hebrew) motto Because the commandment is a lamp and the law is a light , Proverbs 6:23.

The Jewish Theological Seminary in Breslau , actually the Jewish Theological Seminar Fraenckel'sche Stiftung , was a rabbis and teachers' seminar in Breslau that existed from 1854 to 1938 . The seminar, which was established on the basis of a testamentary decree by the Wroclaw Jewish businessman Jonas Fraenckel , opened on August 10, 1854 and developed into one of the most important Jewish educational institutions in Europe until the National Socialists came to power in Germany, which closed the seminar in 1938.

The Jewish Theological Seminary, which opened in 1854, was founded on the basis of a will from the estate of the Breslau banker and commercial councilor Jonas Fraenckel and was administered independently by the board of trustees of the Kommerzienrath Fraenckel foundations . The foundation goes back to Abraham Geiger , who had proposed the establishment of a Jewish theological faculty at a university as early as 1836. However, Geiger was not elected as the first director, but the conservative Dresden chief rabbi Zacharias Frankel (1801–1875). Frankel was the founder of the “positive-historical” school, which, as he explained in his main work Darkei HaMischnah (Paths of Mishnah ), held the opinion that Jewish law, the Halachah , was never static, but always changed Conditions had developed. After Frankel's death, Reader Lazarus became director, after his death in 1879 the powers granted to the director were transferred to the teaching staff. The main lecturer in Talmudic science and rabbinical literature acted as a seminary rabbi; he alone was entitled to issue the rabbinical diploma , the Hattarat Hora'ah .

With the opening of the Jewish Theological Seminary, Wroclaw became one of the most important centers of Jewish science in Europe. The seminar offered unrestricted freedom of research, albeit on the basis of the customs of traditional Judaism, which teachers and students were required to adhere to (literally: to continue on the basis of positive and historical Judaism ).

The seminar was the first German rabbinical seminar. It originally consisted of three departments:

The latter two departments were dissolved in the 1880s, and teacher training was resumed after the First World War , when the seminary experienced a boom. The most important part of the seminar, however, was the rabbinical seminary, which remained the most important institution for the training of rabbis in Europe until the Nazis came to power in 1933.

It also served as a model for the establishment of Jewish universities (Berlin 1870 by Abraham Geiger: University for the Science of Judaism ) and other rabbinical seminars (Budapest 1877: State Rabbinical School ; Vienna 1883: Israelitisch-Theologische Lehranstalt ). The Jewish Theological Seminary of America in New York , an institution of Conservative Judaism , also refers to the Breslau seminary.

The seminar library had over 30,000 volumes; Frankel's monthly for the history and science of Judaism appeared since 1851 and was an important forum for the presentation of the results of scientific research and, last but not least, the self-assurance of the seminar (it appeared until 1939). Part of the library came to Switzerland after the war and is now housed in the library of the Israelite Cultus Community in Zurich .

In 1931 the Prussian government allowed the seminary to run the addition "College for Jewish Theology". During the November pogroms in 1938 , the library and the seminar were devastated, after which it was closed by the National Socialists. Numerous students were taken to the Buchenwald concentration camp . Some activities continued underground for a while . The last two students were ordained on February 21, 1939.

Students of the seminar

By the time it was closed in 1938, the seminary had well over 700 students, around 250 of whom received the rabbi diploma. The students included: