The title of this article is ambiguous. Further meanings are listed under Jive (disambiguation) . 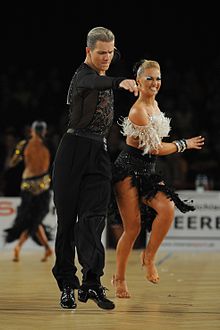 Jive is a name for a dance that has a variety of related precursors of African American origin. These include lindy hop , blues and swing in the early 1930s, boogie-woogie in the 1940s , followed by rock 'n' roll in the 1950s . Stimulating music was and still is characteristic of all these dance forms. American soldiers brought the US- based dances to Europe around 1940 , where they quickly became very popular with the youth. But as “ordinary” dances they didn't just find friends. Dance pope Alex Moore said that he had never seen anything "more hideous" before. English dance teachers developed the elegant yet lively jive with a little slower music. In 1968 it was accepted as the fifth tournament dance to the Latin American dances, since 1976 the jive has been part of the world dance program . Another Jive is very popular in England: Instead of the usual six beats , the Modern Jive is danced to eight beats like the Lindy Hop.

Characteristic are open figures, various kicks and twist. The main feature is the slightly loose swinging of the hips on two and four.

In contrast to rumba and cha-cha-cha , merengue hip actions are danced so that the hip remains above the standing leg and only changes to the other side after the weight change. The steps in the jive are applied over the ball of the foot and the inner edge of the feet. The jive is danced in the open dance position, with the gentleman holding the lady's right hand with his left hand. They are closely related to boogie-woogie and rock 'n' roll.

The dance has a pronounced 4 ⁄ 4 time with an emphasis on the 2nd and 4th beat. The tempo is very fast, usually around 44 beats per minute, but dance schools also go down to 32 beats.

Although the music has a ternary rhythm , it is danced almost dotted for a clearer representation and exaggeration of the rhythm. In the chasse step the timing (counted in sixteenth notes) is on 1, 4, 5. The even beats (in quarter notes) are emphasized by swinging the hip through ("swinging through the knees").