The Cha-Cha-Cha in its western variant, which is widespread worldwide, is one of the Latin American dances of dance sport and is taught in dance schools as part of the world dance program . The original Cuban form of Cha-Cha-Chas differs greatly from today's tournament dance in terms of technique and figure repertoire and can be found in the Spanish spelling Cha-cha-chá [ --ˈ- ] in the modern salsa scene.

The story of Cha-Cha-Chas has only been transmitted orally and is given slightly differently. The rhythm of the Cha-Cha-Chas was invented between 1948 and 1951 by Enrique Jorrín, a Cuban composer and violinist who was then playing in the Cuban Charanga Orquesta América . Jorrín has constantly varied the Cuban dance rhythm Danzón in his compositions since 1948 : Among other things, he reduced the syncopation typical of Cuban music and added rhythmic vocal parts to the originally purely instrumental style of music.

In 1951, Jorrín introduced the Cha-Cha-Cha rhythm under the name he chose neodanzón (Spanish for "new Danzón") on the Cuban dance floors. In 1953 the Orquesta América recorded Jorrín's hits La Engañadora and Silver Star . The new rhythm was very well received by the audience and inspired the dancers to take a dance step that supplements the basic step of the mambo with a quick alternating step . According to Jorrín, this rapid alternation caused a scraping noise that sounded like cha cha chá to him , and which he built into some of his songs as a rhythmic vocal part. This noise and the resulting rhythmic counting method 2 3 Cha-Cha-Cha ultimately gave the dance its name.

The cha-cha-cha spread very quickly across the Cuban border into Mexico and the United States . In the United States, the cha-cha-cha became the fashion dance of 1955 overnight , supported by the legendary mambo and cha-cha-cha orchestras of the Palladium dance hall in New York City . The great success of Cha-Cha-Cha was possibly due to the removal of the syncopation , because this rhythmic peculiarity makes it difficult for western listeners to dance and is one of the reasons for the rapid decline of the mambo.

The dance was technically adapted to the rumba very early on . In 1962 it was officially added to the tournament dances and already then had the basic form of today's tournament variant. A major contribution to technical development was made by Walter Laird , who became Latin world champion with his dance partner Lorraine Reynolds in 1962, 1963 and 1964 and who wrote several dance books. In 1963 the Cha-Cha-Cha was included as a Latin American dance in the world dance program and has since been part of the core of general dance schools around the world.

Cha-cha-cha music is serene and light-hearted. The dance is an amusing and flirtatious flirtation between the dance partners who play with each other in cheeky open and closed figures. It's more cheeky than the dreamy-erotic rumba , but less provocative than the exuberant samba . The Cuban variant is generally calmer and softer.

The Cha-Cha-Cha is in the 4 / 4 -stroke listed , has the main emphasis on the first beat and in competitions at a pace 30-32 cycles per minute played and danced.

Cha-Cha-Cha is unusual for a Cuban musical form in many ways: it was notated in 4 ⁄ 4 time from the beginning , while most other Cuban musical forms were originally notated in 2 ⁄ 4 time and only in the course of the time of Cubans in exile have been adapted to the western 4 ⁄ 4 notation. Despite his roots in Danzón , he has no relation to the clave , the African rhythmic pattern that characterizes almost all Cuban music. After all, it has no syncopation and is thus in contrast to the mambo, in which the main emphasis is shifted from the first to the fourth beat.

Since Jorrín's day, the music to which cha-cha-cha is danced has changed constantly. While the Orquesta América still played in the classic Charanga line-up of the Danzón with percussion, piano, bass, flute and cuerdas , groovy wind accompaniments already prevailed in the Palladium . The fact that it is easily compatible with the metric of Western music also contributed to the lasting popularity of Cha-Cha-Cha . Cha-Cha-Cha is taught in dance schools today based on current chart hits in pop music and Latin rock .

The Cha-Cha-Cha is a stationary dance, so it is largely danced in the square. Like the rumba , the cha-cha-cha also lives from hip movements. The steps should be rather small, otherwise the hip movement would be unnecessarily difficult.

The Chassé on "4 and 1" is characteristic of the Cha-Cha-Cha .

The original Cuban Cha-Cha-Cha and the modern tournament variant differ so much in all other points that they are presented separately in the following.

The original form of the Cha-Cha-Cha is very similar to the Mambo and can only be found today in the salsa scene in recreational dance. The Cuban Cha-Cha-Cha is danced small and "earthy", that is, the steps are always applied to the whole foot and the feet are hardly lifted off the ground. With the Chassé, the feet drag across the parquet as if the dancer wanted to push a sheet of paper across the floor. The hip movement in the Chassé is created by starting the steps with the knee bent, causing the hips to alternately lower. The basic step is characterized by a slight forward-backward movement:

The loose dance posture is flexible in terms of the distance between the partners, there are no sweeping arm movements. The figure repertoire is characterized by the change of place, cross body lead and simple twists and is roughly comparable to the basic repertoire of modern salsa in a straightforward style. 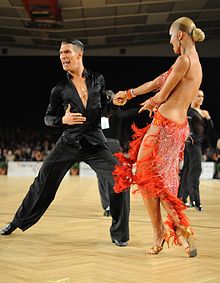 The western variant is characterized by the technique of Latin American dances . Similarities to the rumba can be found in the basic step and basic figures, but the hip movement has a different character due to the higher speed and the quick alternating step, rotating parts take a back seat. In the check and lockstep steps, as in all “real” Latin American dances ( salsa , mambo , rumba, to a limited extent : samba ), the feet are turned slightly outwards, the steps are always applied to the ball of the foot. During the long steps on beats 1, 2 and 3, the leg is fully extended and the heel is flat. In order to be able to accentuate the music more rhythmically, the steps are always carried out at the end of the time interval due to them, but then carried out very quickly. The emphasis on “1” and even more strongly “3” must be made clear; At the end of the sideways chassé, the extended free leg rotates out, reactively by lowering it into the hip.

The step size and the intensity of the hip movements that initiate the steps correlate, which, when viewed by beginners, can falsely give the impression that one is hardly moving.

With guapachá timing , a rhythmic variant, after a chassé, the next forward or backward step is only loaded on the second half of the second beat, so that “4 and 1 and 3” are counted.

Cha-cha-cha sequences (or choreographies) often show open figures; H. the partners dance without touch; otherwise there is more dancing in a half-open than in a closed dance position. Since the hip movements are fast, control of the upper body is necessary, which must not lead to stiffening. The arms support the build-up of tension in the shoulder girdle and serve as a means of presentation for balance and the optical enlargement of the figures.

Walter Laird's The Technique of Latin Dancing or Latin American Cha Cha Cha (published by the ISTD ) summarize basic steps and basic figures (i.e. no poses , falling and lifting figures ) as well as further information on rhythm and execution, but leave plenty of room for one individual interpretation beyond the "bare" steps. The Cross Body Lead figures, which are so typical of Salsa and Mambo, and all figures based on them are not listed in these works. The beginner should learn the figures roughly in the order provided in the works mentioned, with the Queen's Turn, the New Yorker, Hip Twist, Fan, Hockey Stick, Alemana, Opening Out, Three Chachas (locksteps forwards and backwards) as the first entry and typical Figures can serve.

The typical music for dance, with which the dance is still associated today, is Tommy Dorsey's version of Tea For Two Cha, Cha from September 1958.

The Cha-Cha-Cha was dance of the year 2007. On this occasion, 323 German and two Austrian dance schools set a new world record in Cha-Cha-Cha mass simultaneous dancing with 50,419 participants on November 3, 2007. The dance started at 9:12 p.m. and lasted about six minutes.