It is located south of Montreal between the Green Mountains and the Adirondack Mountains on the border of the US states Vermont and New York and has a small share in the north in the Canadian province of Quebec . It is named after Samuel de Champlain , who researched it in 1609 and drove it from July 4th of that year. At that time it was considered to be the border between the tribes of the Algonquin in the west and the Iroquois in the east, which was also expressed in the name that the native inhabitants had given the lake: Pe-Tonbonque (for example: "Water that between them [the Tribes] lies ”) with the Algonquians, Caniaderi-Guarunte (roughly:“ Lake, which is the gateway to the country ”) with the Iroquois.

In the approximately 180 km long and up to 19 km wide Champlain Lake are about 80 islands, one of which forms a separate county in the US state of Vermont. It is the largest lake in the United States after the five Great Lakes in the Midwest , the Great Salt Lake in Utah , Lake Iliamna in Alaska, and Lake Okeechobee in Florida .

After the discovery of the lake by Samuel de Champlain in 1609, it and the surrounding areas belonged to New France until it was conquered by the British during the Seven Years' War (1754–1763). The French built several forts along the lake, the most important of which was Carillon Fort , which was built in 1755 at the beginning of the Seven Years War at the southern end of the lake. The fort has been the scene of military clashes, first between the French and the British and then between the British and the Americans.

During the American Revolutionary War (1775–1783) it came on Lake Champlain on October 11, 1776 to the Battle of Valcour , the first naval battle of the United States Navy . It ended with a British victory.

On September 11, 1814, the American fleet under Commodore Thomas Macdonough fought a victory against the advancing British when they tried to invade New York from Canada ( Battle of Plattsburgh ).

In the 19th century, Lake Champlain was connected to the Hudson River by a system of canals . The ports of Burlington , Port Henry and Plattsburgh are now of little commercial interest.

The water became famous through the rumor of a sea ​​monster , which is named after its supposed discoverer de Champlain Champ . In fact, de Champlain only noted in his files the sighting of an unknown fish whose description fits a sturgeon living in the lake . The distant relative Nessies has been under legal protection since 1982 as it has become a major tourist attraction . 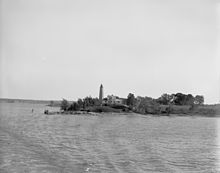