The Samba , the Samba, ( Portuguese o samba , often called "Samba") is a ballroom dancing in the 2 / 4 -Stroke, which evolved from the resulting during the 19th century eponymous Brazilian folk dance with African roots.

The Samba is not to be confused with the Argentine Zamba , a slow rhythmic dance in 6 / 8 ¯ clock.

Samba was originally a collective name for many dance forms that were introduced to their new homeland Brazil in the 19th century by African slaves from the Congo , western Sudan and Angola . The rhythm of the drummed batuques is considered to be the origin of samba music, the samba de roda , a circle dance ( Portuguese roda , English round , circle ), is considered to be the origin of today's Brazilian samba.

With the help of samba de roda , a combination of dance , music and poetry, people of African descent gave expression to their history, culture and experiences, which were marked by a lot of suffering. It was danced in a circle, with two dancers always in the middle, cheered on by calls from the others and at the end replaced by others from the circle. For accompaniment, not only drums and other typical Brazilian instruments were used, but also clapping hands or beating cutlery, glasses and plates for rhythmic support. Samba has been the main dance of the Rio Carnival since around 1920 .

In 1910 the Maxixe , a close pair dance related to the Tango Argentino , came to Europe from Brazil , but could not establish itself there. The Maxixe reappeared in tournament programs under the name "Samba" in 1924 and 1925, again without a major breakthrough.

This was achieved after the Second World War , when the samba was part of the repertoire of many dance bands. During the early days of the economic miracle in 1948/49, the samba achieved great popularity in a very simplified form, e.g. B. by titles like Am Zuckerhut, am Zuckerhut, the Senoritas are doing well .

In the years that followed, dance schools successfully included samba in their program, and in 1959 it was also included in the tournament program of Latin American dances . 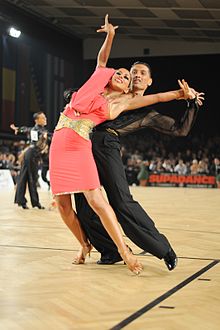 The music and dance style, originally from Afro-Brazilian music , belongs in its European variant to the five Latin American dances and has little in common with the original Brazilian dance form. Typical for the Samba are clear, rapid hip movements and the bouncing back and forth of the lower body. Since the samba is not a stationary dance, it creates a flowing movement across the parquet.

Samba is danced in tournaments at a tempo of 44 to 53 beats per minute . There are different rhythms in samba. On the one hand, a distinction is made between body and foot rhythm. The body rhythm is reproduced by a forward-backward movement of the pelvis, always on "slow". Depending on the type of figure danced, the feet have a different rhythm. The basic rhythm of the more stationary figures is denoted by the English-language counting measure one-a-two . A 2 ⁄ 4 time consists of three steps, the first step takes up three quarters of a beat, the second a quarter and the third step a whole beat, much like the word Amsterdam is pronounced. This basic rhythm is often varied, for example, figures walked are counted in the rhythm "slow-quick-quick" or "quick-quick-slow". In some figures a “slow” is resolved from this, so that a rhythm “slow-quick-quick-quick-quick-quick-quick” results. If you want to get closer to the Brazilian origins of the dance, you can dance more than a back and forth movement of the hip in one fell swoop; three hip movements per cycle are possible. These are the Batucadas, which is also a name for a style of Samba. If a “Quick” is danced in a figure, bouncing is also not necessary.

Disco-Samba is a simple two-step form of Samba, in which the support space (steps 2 and 3) is replaced by a simple tap , i.e. connecting the foot without weight. It does without hip and bounce movements.

Disco-Samba can be seen as a precursor to the more demanding 3-step version. Some dance schools also keep this 2-step variant as an independent dance.