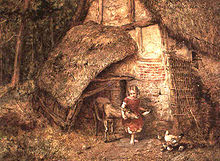 He received his training in London and worked there until 1858. Based in Thorpe near Chertsey ( Surrey ) since 1859 . In the years from 1851–1886 he participated in numerous exhibitions, including at the Royal Academy of Arts in London. In 1871 he published his illustrations "Nature Pictures, a Series of 30 Orig. Illustrations" in London. Most recently he lived in New Malden (Surrey).