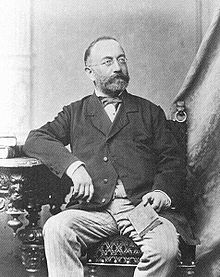 Josef Budenz graduated from high school in Fulda in 1854 and studied in Marburg and from 1855 for three years in Göttingen, a. a. with Theodor Benfey with a focus on Indo-European language comparison research . Doctorate took place in 1858.

In 1858 he was in Budapest and taught in Stuhlweissenburg . In 1861 he was appointed librarian at the Hungarian Scientific Academy . Under the guidance of Pál Hunfalvy, he deepened his knowledge of the Urals and Altaic languages. From 1868, according to another source from 1872, he was a full professor for Altaic comparative languages, the chair was set up especially for him. In 1871 he became a full member of the Hungarian Academy of Sciences . On March 17, 1884, he was honored in the university auditorium. From 1876 he was a corresponding member of the Russian Academy of Sciences in St. Petersburg . Budenz died on Good Friday, April 15, 1892 and was buried on Easter Sunday, April 17, 1892.

On May 26, 1963, a memorial plaque was inaugurated in his honor at today's village community center, the location of the former school in Rasdorf. The memorial plaque bears the inscription: The house in which Joseph Budenz was born on June 13, 1836, stood until 1954. From 1868 until his death on April 15, 1892 he was a professor at the University of Budapest and is the founder of the modern Finnish-Ugric comparative language. Donated by the Societas Uralo-Altaica on May 23, 1963

An article was also published in Fuldaer Geschichtsbl Blätter No. 5 of 1936 on his 100th birthday. The Budenz-Gymnasium in Budapest published a Budenz memorial book in Hungarian in 2002. A “Budenz Day” is held every year at the Finnish-Ugric seminar at the University of Göttingen.

The "headquarters" of the Budenz families in Rasdorf can be found at "Am Anger 3 or 5".