History of the record label

The record label Jubilee Records was founded in May 1946 in New York City by Herb Abramson and Jerry Blaine . Blaine later took over the stake in Abramson. The record label specialized in rhythm and blues and current hit recordings such as Latin jazz by Bobby Montez . In addition, some jazz records by musicians such as Charles Mingus ( Mingus Three 1957), Jackie McLean , Ray Draper , Joe Puma , Herb Geller , Lou Levy , Eddie Costa and Vinnie Burke as well as the singer Ethel Ennis appeared on the label . 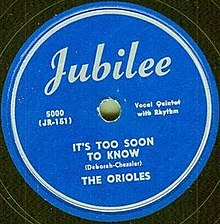 Orioles - It's Too Soon to Know

Jubilee Records was the first label to hit the white record market with a hit by the black vocal group Orioles ; her title Crying in the Chapel stayed at first place on the Rhythm & Blues charts for a total of 18 weeks, reached number 11 on the pop charts in 1953 and became a million seller . In general, the label catalog reads like the discography of the Orioles, who gave the label the label 's first single with Jubilee Catalog No. 5000 ( It's Too Soon to Know ) in July 1948 and all the singles there up to their label change in the year Published in 1956.

In addition, the sub-label Josie Records was founded in 1954 ; Hits on Josie were the tracks Speedoo by The Cadillacs and Do You Wanna Dance by Bobby Freeman. The last big hit was the rhythm and blues instrumental Poor Boy / Wail! from the Royaltones . Jubilee / Josie were liquidated in 1970; their catalog was taken over by Roulette Records . Many jazz tracks later appeared in CD form on Fresh Sound Records .