East side of the Karlstor 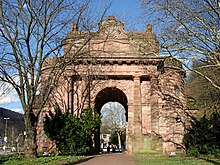 West side (city side) of Karlstor

The Karlstor ( listen ? / I ) is a historic building in the city of Heidelberg . It marks the eastern end of Heidelberg's old town .

The Karlstor was built between 1775 and 1781. It replaced the Inner Obertor (Jakobspforte), which was at the height of today's house at Hauptstrasse 231 (see the memorial plaque there). The Karlstor was originally intended as a thank you gift from the citizens of Heidelberg to Elector Karl Theodor . However, the Heidelberg company complained about the high costs during the construction phase.

Architect Nicolas de Pigage gave the Karlstor the shape of a Roman triumphal arch . The exterior design with the sculptural work was carried out by Peter Simon Lamine . On the east side of the gate facing away from the city center of Heidelberg is the coat of arms of the elector. It is flanked by two lions. On the west side there are portraits of the Elector Karl Theodors and his wife.