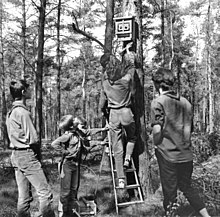 The Klaus Gundelach Prize is one of the oldest environmental prizes in Germany and is awarded annually by the Schutzgemeinschaft Deutscher Wald (SDW) for special merits in youth work and nature conservation .

The prize is named after Klaus Gundelach (1905–1989), the founder of the German Forest Youth . The prize, donated by the Federal Association of the SDW on his seventieth birthday, has been awarded by the President of the SDW for outstanding achievements since 1975. The award is given to individuals or groups of forest youth who have made a name for themselves with particular commitment, energy and prudence, for example in the care and supervision of sponsored forests, forest protection and actions to protect an ecosystem or in the organization and management of camps. In addition, personalities outside of the forest youth can also be honored if they have supported the youth organization through mentoring, generous support measures and special public relations work. The prize is usually awarded once a year. The prize money in various amounts can also be granted in kind at the request of the prize winner. The first prize winner was Dieter Weldt, a long-time employee of Klaus Gundelach, who helped shape the youth in the forest by promoting not only the initially purely biological way of working of the groups in forest operations, but also music, especially singing, as well as youth-moving elements, including camps and large-scale trips . The award winners are presented and honored in the bi- monthly journal of the SDW Unser Wald (Bonn, ISSN  0935-7017 ) and in the periodicals of the Waldjugend.