The component theory is a rhythm theory developed by the musicologist Peter Petersen .

Component theory no longer restricts the concept of duration to the individual note or sound, but rather focuses on the duration between all sound phenomena (“components”) set by the composer in order to adequately grasp the rhythm of a composition. Petersen cites the following components that are considered to have rhythmic potential: sound , pitch , diastematics , articulation , dynamics , timbre , harmony , texture, phrase , language. The rhythms derived from the components are called "component rhythms". These “secondary” rhythms do not emerge directly from the musical text, but have to be determined analytically. It is their interaction that defines the rhythm of a composition.

The conventional understanding of rhythm as a sequence of tone durations is abolished by component theory because other durations besides the tone durations must always be taken into account. While the rhythm-generating function of individual parameters was previously only considered selectively (e.g. Jan LaRue's “harmonic rhythm”), component theory first provides a systematic consideration of these aspects and thus presents itself as a “comprehensive theory of the time relationships in musical sentences , which potentially all Recognizes sound signals as permanent and therefore rhythm-generating ”(p. 7). It provides a differentiated set of instruments for the rhythmic fine analysis.

The view of the meter is also changing through component theory. The time signatures prescribed in traditional music , which are necessary for the coordination of voices and players, do not serve as the starting point for an analysis based on component theory, rather the rhythmic structure is determined independently of them. In this way information can be gained about the changeful rhythmic events within metric units, and meter can be described as the result of the composer's composition. 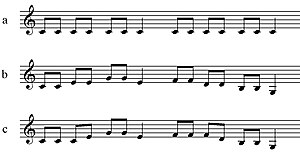 The usual view of evaluating a, b and c as melodies with "the same rhythm" restricts the view to the immediately noted durations, i.e. H. on the component "sound". If the “pitch” component is also taken into account, i.e. the duration between the pitch changes, there are additional (“secondary”) rhythms for b and c, which are both compositionally intended and help determine the timing of the composition (NB 2):

The analysis of the constructed example is expanded to include the component rhythms “phrase” and “diastematics” (crest and keel tones, i.e. upper and lower directional tones with time-related relevance) (NB 3).

In this analytical consideration it becomes immediately apparent that the three melodies a, b and c are not to be regarded as rhythmically identical. Secondary durations are effective that cannot be read directly from the musical text, but are nevertheless significant for the rhythmic structure.

In this case, the rhythm profile is based on the following component rhythms:

As can be seen, the rhythm profile in the present example shows the 2/4 time as a metric unit, without the usual time accentuation being included. Above all, however, the different structure of the two phrases emerges: 3 + 5 quarters in the antecedent, 4 + 4 quarters in the subsequent clause (NB 4). The example remains limited to unanimity. Taking into account the components that are particularly important in polyphony (especially harmony and texture), the picture could still change.

The height of the pillars ("towers of thirds" or "pillars") of the rhythm profile consisting of noteheads results directly from the number of components that are effective at the given moment in their respective weighting (whereby by layering thirds or stacking noteheads in the visualization of the component rhythms the current principle that greater weight is to be attached to long durations than to shorter ones is taken into account). The higher the towers of thirds, the greater the “rhythmic weight” (p. 9) of the respective moment. The rhythm profile depicts the interaction of the coordinated component rhythms; it captures the rhythm of a musical context, understood as a “fabric of component rhythms” (p. 20). The changing rhythmic weights reveal the metric of a piece of music, which turns out to be not rigid and regular, but rhythm-dependent.

Consideration of the historical context

The components that claim analytical validity, as well as the criteria for their weighting, are discussed in detail by Petersen using numerous musical examples from various epochs (especially pp. 20–63). The extent to which a component is of rhythmic relevance in the musical composition to be analyzed and which weight values ​​are assigned to it cannot be fully formalized, but remains the subject of permanent, historically sound reflection. Petersen states: "In general, a rhythm analysis must always be preceded by a complete composition analysis" (p. 73). This includes taking into account music-historical rules and styles.

One of the central statements of component theory is that “even unison melodies have a characteristic 'rhythm' and not just one 'rhythm'” (p. 20). The differentiated rhythm profiles, which result from the component-rhythmic analysis of one-part tone sets and which depict the interaction of the component rhythms, make this clear. A concise juxtaposition of mono- and polyphonic tone set, with a few bars erklingend distance within a composition, delivers Petersen analysis of two sections from Prelude to the Afternoon of a Faun of Debussy (NB 5).

First the melody is played by the flute alone (bars 1–4), then voices from the orchestra join in (bars 11–14). A comparative look at the profiles created by means of component analysis shows that the profiles are initially almost the same: the accompaniment reinforces the rhythmic weights of the flute part. In the following bars, however, it changes the weight distribution. Particularly noteworthy is the strong rhythmic weighting of the flute's e 2 in bar 13, which clearly distinguishes the phrase ends (cf. bars 3–4 and 13–14). With the method of rhythmic detailed analysis provided by component theory, as the example suggests, facts can be grasped and objectified that would otherwise be difficult to name.

The beginning of Mozart 's Piano Sonata in C major, K. 545, is a further example of a rhythm profile for a polyphonic movement . NB 6 (see p. 276, there also with derivation from the component rhythms). The rhythm profile shows the concrete form of the 4/4 time in its variable setting of the rhythmic weights: The largest weights (= columns of thirds) are set in half a bar at the beginning, full bar from bar 5, and then in a denser sequence towards the end. Meter is constituted here in a variable rhythmic design.

The fact that Petersen's method of component-based rhythm analysis is basically independent of clock laws and clock limits (clock indications are only for orientation) leads to new insights into the relationship between rhythm and metrics. The metric conditions are analyzed from a different perspective. It becomes clear that meter is to be seen as an “object of compositional design” and not just as a “norm or convention” (p. 11), that it is not (or not only) a premise, but the result of rhythmic formation. Accordingly, Petersen states that "the metrical quality of a musical composition can be determined by analyzing the rhythm" (p. 82).