The Kunstkammer Wien is a collection of the Kunsthistorisches Museum in Vienna . It is modeled on the art and curiosity chambers of the late Middle Ages, the Renaissance and the Baroque periods and goes back primarily to the earlier collections of the Habsburgs .

View of the Vienna Art Chamber

Device for perspective drawing by Jost Bürgi (Kassel, 1604) in the Kunstkammer Vienna 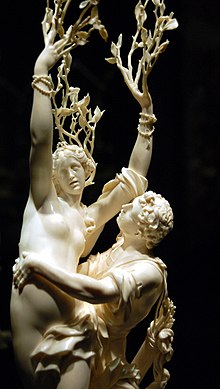 Ivory statuette "Apollo and Daphne" by Jakob Auer (Vienna, around 1688/90) in the Vienna Art Chamber

The Kunstkammer Wien emerged from several individual collections that were brought together by various clients. The following collections form the basis for today's Kunstkammer:

The collection in Ambras Palace was brought to a safe place from Napoleon's troops in Vienna in 1806, where it initially retained its independence in the Lower Belvedere Palace . It was not until the great reform of the imperial collections, which began under Emperor Franz Joseph I in 1875, that all of the Kunstkammer holdings in the Kunsthistorisches Museum, opened in 1891, were finally combined and only those objects with insignia character and those reminiscent of members of the imperial family were left in the treasury.

The newly formed collection found its place on the mezzanine floor of the building and was initially referred to as the “collection of industrial art objects”. In 1919 it was named "Collection for Sculpture and Applied Arts". However, since this collection contains only a small number of large sculptures and only a few objects of the arts and crafts, this name was considered inappropriate and in 1990 it was decided to rename it “Kunstkammer”.

After the collapse of the monarchy in 1918, the collections of the Austria-Este branch line were added to the Vienna Kunstkammer , and in 1921 the tapestry collection was added, consisting of around 800 tapestries, which had originally served to decorate the imperial palaces. Along with the one owned by the Spanish crown, this collection is one of the most important of its kind. In 1938, Gustav von Benda donated other important works of the early Florentine Renaissance with a bequest from the collection. The art collection survived the Second World War with very little losses. Only parts of the tapestry collection, which had to be given on loan to Berlin and to furnish Goering's Carinhall hunting lodge , have been lost since the end of the war.

Since 1963 all holdings of the collection have been reunited in the Kunsthistorisches Museum Vienna. In 2002 the structural and technical conditions required the temporary closure of the Kunstkammer. This was followed by a fundamental renovation and expansion of the premises as well as the realignment and contemporary presentation of the objects. The artistically significant exhibits include goldsmiths such as the famous Saliera by Benvenuto Cellini , sculptures such as the Krumlov Madonna , bronze figures, ivory work and stone vessels, but also clocks, mechanical automatons, scientific instruments, technical gadgets and much more.

After the first room of the museum could be visited in a public preliminary presentation in December 2012, the Kunstkammer Wien, considered one of the most important art collections in the world, was reopened on March 1, 2013. In the future, more than 2,200 objects will be on display in an area of ​​around 2,700 m², which will be presented in 20 themed rooms.