This article explains the work of Cellini, for the general term see spice shaker . 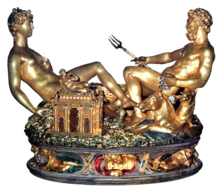 The Saliera ( Italian salt or pepper barrel, i.e. the predecessor of today's salt shaker ) is a table vessel made by the Italian sculptor and goldsmith Benvenuto Cellini for Francis I of France from 1540 to 1543. It is kept in the permanent exhibition in the Kunstkammer of the Kunsthistorisches Museum in Vienna . 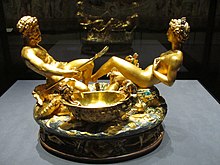 Saliera by B. Cellini. The building is the container for the pepper (2015)

The Saliera is considered the only surviving goldsmith's work by Benvenuto Cellini. It is a work of the late Renaissance and shows an allegory representation of the planet earth : Neptune , the god of the sea, at his feet a ship as a salt container, carried by four equine beings with horse bodies and fish tails, and Tellus , the Roman goddess of the earth. At its side is a temple building that serves as a container for pepper, as well as depictions of land animals and a cornucopia bursting with flowers and fruits.

The figure of Neptune here symbolizes the sea, which produces the salt, whereas Tellus symbolizes the earth, which produces the pepper. Cellini writes about his iconographic program in this regard: “Both had gracefully pushed their legs together; they kept one stretched, the other bent; what position mountain and plain of the earth should mean. ”The base of the sculpture is divided into eight niches in which allegories of the seasons on the one hand and dawn, day, twilight and night on the other hand are depicted.

The figures were from Cellini, who ran a large workshop with many employees from France, Italy and Germany at that time in France, freehand from gold sheet driven - as he wrote in his work description "of such a beautiful shape and so graceful when I only knew and could ”- and partly enamelled . The base is made of ebony with gold decorations. The sculpture is around 26 cm high and 33 cm wide. The salt barrel rested on four ivory balls loosely embedded in the ebony so that it could be rolled on all sides.

The original client was the Cardinal of Ferrara , Ippolito d'Este . Cellini made a silver goblet and basin for him in Rome, with the salt barrel as a supplement. However, the cardinal withdrew his order when he saw the wax model and thought it could not be carried out. Cellini later took the model with him on his trip to France and showed it to Francis I, who already had the cardinal of Ferrara's cup and cymbals as a gift. Franz I gave Cellini the order to build the salt barrel.

It came later as a gift from the French King Charles IX. to Archduke Ferdinand II of Tyrol in Habsburg possession. Charles IX thanked him with the gift that Ferdinand II had represented him as bridegroom at the wedding.

The salt barrel was part of the art collection of Ambras Castle and was transferred to the Kunsthistorisches Museum in Vienna when this collection was dissolved in the 19th century . The governor of Tyrol, Herwig van Staa , tried in vain to bring the Saliera back to Tyrol.

Benvenuto Cellini and his work soon fell into oblivion, which explains the small number of his works that have survived today. The Saliera was also listed as an anonymous work in the Ambras Castle collection. The renewed interest in Benvenuto Cellini in the German-speaking world goes back primarily to Johann Wolfgang von Goethe , who translated the artist's vita into German, or rather edited it. Following the publication, a feverish search for still existing works by Cellini began. Varnhagen von Ense reported in this connection that Karl August, Duke of Saxe-Weimar, during a visit to Vienna had the opportunity to view the collection from Ambras that had just been brought there and discovered the Saliera described in the vita, which he immediately told his friend about Goethe reported.

The value of the sculpture is estimated (2006) at around 50 million euros (the basis for this estimate is the insurance value).

On the night of May 11, 2003, Robert Mang climbed into the right wing, which was scaffolded for renovation, and stole the Saliera

On May 11, 2003, the Saliera was stolen from the Kunsthistorisches Museum in Vienna, which was scaffolded due to construction work. The alarm system triggered, but the guards accepted a false alarm , so that the theft was only discovered by the cleaning staff the next morning. Criminologists found that the perpetrator or perpetrators had not had more than 46 seconds to commit the crime. They had got on the scaffolding through a window.

The spectacular theft aroused worldwide media interest, and advertisements aimed at the thieves were placed in the major daily newspapers, albeit without success. The American criminal investigation department FBI put the work in fifth place of the most valuable stolen art objects. Despite this, the Saliera remained missing for three years. A special investigation group, Saliera, was set up at the Vienna Criminal Police Directorate; Ernst Geiger was the chief investigator .

After leaked search details, the Federal Criminal Police Office announced on January 20, 2006 that part of the figure - the trident - had been sent to him on October 27, 2005 . An informant could provide further information on the whereabouts of the figure. At the same time, the photo of an alleged perpetrator was published and a large-scale manhunt was initiated. The picture came from a surveillance camera in a cell phone shop in Vienna's Mariahilfer Strasse , where a man had bought a prepaid phone that was used to send blackmail text messages. The sender demanded 10 million euros from Uniqa Insurance , otherwise he would melt the work of art and document this act on video. The suspect was recognized by friends after the photo was published and turned himself in to the police the next day. After he first denied that he was involved in the theft, he finally made a confession and led the police on January 21, 2006 to a forest near the village of Brand near Zwettl , where he had buried the Saliera in a box.

The perpetrator, Robert Mang , was 47 years old, the father of two children and the owner of an alarm system company in Vienna-Neubau . He said he discovered weak points in the museum's alarm system and committed the act while drunk. He initially kept the stolen goods under his bed. On September 7, 2006, he was sentenced to four years in prison for aggravated burglary and coercion. However, the Supreme Court overturned the judgment because of a formal error. The SMS that the perpetrator had sent to the insurance company should not be seen as coercion but as severe blackmail. In the new trial, the sentence was increased to five years in prison, but the convicted person was released early from Steyr prison on October 20, 2008 after two years and nine months.

Curiously, in 2004, when he had not yet been investigated, the perpetrator gave an interview as a security expert to the private Viennese radio station Orange 94.0 , in which he commented not only on alarm systems in general, but also on the Saliera and its alleged poor security. This connection was uncovered in January 2006, whereby the statements about the poor safety standard turned out to be untrue.

On January 22nd, 2006, then Interior Minister Liese Prokop formally handed over the Saliera to the Federal Minister for Education, Science and Culture Elisabeth Gehrer , who forwarded it to the Kunsthistorisches Museum. Experts found slight damage, especially scratches on the surface of the golden figures, which could be traced back to the broken glass of the showcase and the improper storage. Parts of the enamel decorations had also chipped off in several places.

From January 31 to February 19, 2006, the rediscovered work of art could be viewed again in the Kunsthistorisches Museum. This was followed by a three-week restoration phase. From March 14th, the golden salt barrel was finally returned to the museum on the occasion of the “Europe without borders” exhibition.