Salt and pepper shakers, combined as a spice mill

A condiment shaker is a handy vessel made of plastic , glass , ceramic , stone , ivory , wood or metal in which spices are stored, which for seasoning of foods can be used. The top of the container has small holes through which the spice can be sprinkled. Salt and pepper shakers and shakers for various kitchen spices are widespread .

Spice shakers are filled either after removing the upper part or from the underside, which in this case can be closed with a stopper. Often shakers are made in the same design, mostly for salt and pepper. 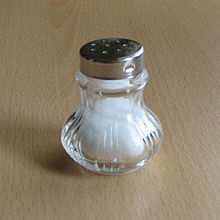 Salt shaker made of glass with metal lid

Before the invention of the salt shaker , table salt was kept at the table in a saliera . In the Middle Ages, the salt ship was used on princely tables . The name comes from the shape of the shell, similar to a ship. Many antiques similar to salt shakers are mostly sandboxes for text written with a quill pen and ink. Rice is usually added to salt shakers to prevent clumping due to moisture penetration . A variant of the salt shaker is the salt mill , which grinds coarse evaporated salt - more rarely rock salt - before use.

In Great Britain, Henry Thacker received a patent no. 17.210 for "Improvements in the Manufacture of Pepper Castors and the like", in which he describes mechanisms with which the ability to pour and portion the spices in the shaker can be maintained (tight container, pouring valve).

For example, Johannes Oster from Berlin received early patents in Germany on December 8, 1891 for the construction of a "salt and pepper shaker" with a valve mechanism for dosing the spreading material and closing the storage container ( Imperial Patent Office , patent no. 60175) and Johannes Schaar from Hamburg on May 28, 1899 for a "salt shaker" which "combines the properties of a sprinkler box and an open salt barrel" (Imperial Patent Office, Patent No. 108173). The widespread use of salt shakers and their widespread manufacture was only made possible by the pourability of the salt developed in 1911 by the American salt manufacturer Morton Salt .

A special object is " Max and Moritz " by the Bauhaus student and teacher Wilhelm Wagenfeld , which WMF has been producing since 1953. There are also craft kitsch and souvenir products, usually paired with a pepper shaker or a pepper mill. As early as the end of the 1920s, German porcelain factories ( Porzellanfabrik Goebel , Rödental near Coburg) were providing spreaders based on the model of comic figures, e.g. for the US market. B. Mickey Mouse or Peanuts .

Pair of salt and pepper shakers in a similar design

The pepper shaker is a container for dosing ground pepper. Mainly salt and pepper shakers form a similarly designed pair, as they are the most common spices on the table. Combinations of three are also known from Eastern Europe: salt, pepper and paprika shakers are made in the same design and are often placed on an accompanying serving plate. Salt and pepper shakers are primarily part of a cruet set in combination with a vinegar and oil bottle, mustard pot or other spice shakers.

A special spreader was registered with the German Patent Office in 1919 by Raoul Heinrich Francé for utility model 723730. He had developed a spreader in order to be able to distribute microorganisms evenly on earth. Since he was one of the first bionists of the 20th century, he was inspired by the poppy seed capsule after many unsuccessful attempts at scattering different shapes . This said “shaker for spices, medicines, etc. like. ”was not fully developed at the time. The poppy seed capsule is optimized for a wide and wide spread of its seeds, a salt shaker should, however, be precise and not necessarily spread widely - nevertheless, the model from Francé can still be regarded as the first “bionically” developed salt shaker.

There are sugar shakers for the coffee table, which are shaped differently due to the desired amount and grain size of granulated sugar .

A pepper mill is a container to be able to dose unground peppercorns with the built-in grinder in a suitable application form.